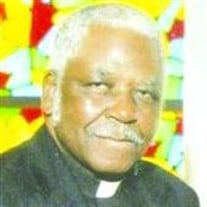 Angels were dispatched from Heaven to usher Bishop A.D. "Dock" Davis Jr., into God's Heavenly Kingdom on June 20, 2018. He met the love of his life, Betty Brown Davis, and they were married after a six-month courtship in 1949. He was a faithful companion until death separated them after 60 years in 2009. They were blessed with 13 children, 10 sons (Minister Matthew, Minister Isaiah (Vickie), Thomas (Clara Stevens), Dock III, Timothy, Elder Samuel (Denice), Daniel, Elder David (Lenora), James, and Elder Titus (LaToya) Davis; three daughters, Betty Davis-Simpson, Vickie Davis-Boyd (Waddell) and Debbie Lewis. His earthly pilgrimage, which lasted 93 years, began on April 28, 1925 in Richland County, S.C. where he was born to A.D. "Dock" Davis, Sr. and Pearl Bright Davis, both of whom preceded him in death. Also preceding him in death were five sisters, Alberta (Eloice) Boyd, Nancy Richardson, Marie (James) Dixon, Julia Davis, and Francis Boyd, and three brothers, Harrison (Bernice), Henry and William "Dan" (Thomasina) Davis. He is survived by one sister, Mother Elizabeth (Amos) Griffin and a host of grandchildren, great-grandchildren, great-great-grand-children, nieces and nephews. Bishop Davis accepted the Lord Jesus Christ at an early age, and after receiving the Holy Ghost, began his ministry career at the age of 17 in 1942 at the Way of the Cross Church in Columbia, S.C. He attended Jones Williams Theology Seminary in Baltimore, Maryland, while working on the Shipyards in Baltimore, Md. from 1943-1949. He moved to Winston-Salem in 1955 and served as assistant pastor at Progressive Church of Jesus until founding Mount Olive Apostolic Church in 1969, where he remained pastor until his death. He was a long-standing board member of the United Churches of Jesus Apostolic. He lived by a simple motto: "Follow peace with all men, and holiness, without which no man shall see the Lord" (Hebrews 12:14). Visitation will be held on Saturday, June 23, at 10:30 at Mount Olive Apostolic Church, followed by services at 11:00. At his request, there will be no public viewing.

Angels were dispatched from Heaven to usher Bishop A.D. "Dock" Davis Jr., into God's Heavenly Kingdom on June 20, 2018. He met the love of his life, Betty Brown Davis, and they were married after a six-month courtship in 1949. He was a faithful... View Obituary & Service Information

The family of Bishop A.D. "Dock" Davis Jr. created this Life Tributes page to make it easy to share your memories.

Angels were dispatched from Heaven to usher Bishop A.D. &quot;Dock&quot;...

Send flowers to the Davis family.