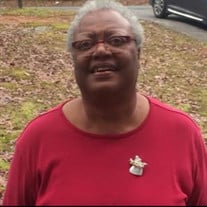 Adrian Darell Frazier, better known as “Moochie,”was born August 20, 1955 in Winston Salem, North Carolina, to the late Bleaka Frazier Penn and Lester Frazier. She departed this earthly life on March 2, 2021, after a brief illness. Adrian attended the Winston Salem/Forsyth County Public Schools, and graduated from R.J Reynolds High School in 1973. After high school, Adrian made a selfless sacrifice to raise her three youngest sibling: Rayvon, Calvin, and Telfer, as her own. She was employed at Wachovia in the Trust department for over 28 years. She was currently employed at Morgan Stanley Wealth Management, and was employed there for over 15 years. In addition to her parents she was preceded in death by her brothers Lester Frazier Jr., Andrew, Woodrow, Edward (Jackie), Leo (Eleanor), Rayvon Penn (Geraldine). Left to cherish her memories and continue her legacy is her sister Telfer Penn-Smith, and her brother Calvin Penn (Roy); and a host of nieces, nephews, cousins, other relatives, and friends. A private memorial will be held Saturday, March 6, 2021. There will be no public viewing Arrangements are in the care of Douthit Funeral Services.

The family of Ms. Adrian Darell Frazier created this Life Tributes page to make it easy to share your memories.

Send flowers to the Frazier family.