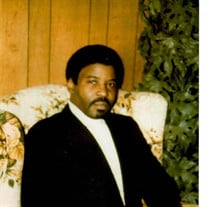 Mr. Alfred Benjamin Wilson of 4345 Northampton Drive, (Piney Grove Nursing Home) was born on December 13, 1937, in Winston-Salem, NC, to Harry and Rose Miller Wilson. He was educated in the Forsyth County Schools System. Mr. Wilson enlisted in the United States Navy on February 10, 1956. After 4years, he completed his military service and was given an honorary discharge. Returning home, he found employment with R.J. Reynolds-Archer Plant. Mr. Wilson them married the late Rosa Lee Coles Armstrong. This union lasted for 14 years. He found love again and married Pecolia Griffin. They were united for over 40 years, until her health started to fail. She, consequently, went home to be with the Lord in February of 2016. Mr. Wilson was a hard worker, extremely neat, and he knew how to save a dime. Studying the bible was one of his loves. He accepted the Lord as his Savior as a young man. Listening to the various bible study broadcast, watching the old classic television programs, and the cooking shows, brought much delight to his heart. Mr. Wilson took the heavenly flight to be with his Redeemer on Monday, July 29, 2020. We will certainly miss him. He was Proceeded in death by his parents, wife (Pecolia); five brothers, Rev. John Miller, Sammy Miller, Robert Miller, Henry Wilson, and David Wilson; one sister, Beulah Diane Wilson Lomax. He leaves to mourn; one daughter, Patricia Wilson Brown, one son, Lionel Etheridge, two grandchildren, Kimberlee Brown and Lionel Rayvon Robinson; 3 great grands, O’Mya Brown, Lauren and Logan Robinson. Known as “Uncle Alfred” to his nieces and nephews, and one special niece Avis Sewell, and a great niece Angell Mitchell, as well as, a host of cousins and friends. Again, we will miss him! “In my Father’s house are many mansions, if it were not so, I would have told you, I go to prepare a place for you. And if I go an prepare a place for you, I will come again, and receive you unto myself , that where I am, there ye may be also” John 14:2—3. A public viewing will be held Monday, August 3, 2020 from 2pm until 5pm at Douthit's. A private services will take place Tuesday at Douthit's.

The family of Mr. Alfred Wilson created this Life Tributes page to make it easy to share your memories.

Send flowers to the Wilson family.