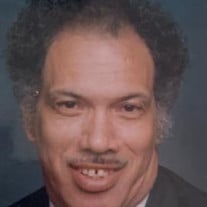 Deacon Alvin Lewis Miller, 85, of Winston Salem, NC, transitioned from earth into his eternal home on July 08, 2020 after a long battle with cancer. He was born in Barren Springs, Virginia on October 10, 1934 to loving parents, William Durando and Edna Earl Miller. Although he was a quiet man, he lived a fulfilling life. After serving in the United States Army, he married his beautiful wife, Delilah Hash Miller where they had two children, Reuben Durando and Vanessa Renee. Deacon Miller was also a hard-working man who diligently provided for his family. Before he retired from AMP, Inc, he was a mechanic and owned a janitorial service where he had several clients. One of his main clients that eventually became a place for him to participate in their senior programs was the St. John Episcopal Church in downtown Winston Salem. Deacon Miller was a faithful church member and volunteer at Love Christian Center in Salisbury, NC where he served until he was no longer able to drive. There he served on the deacon board, finance department, and wherever he was needed. Afterward, he began to attend St. Peter’s Church & World Outreach Center. Deacon Miller was preceded in death by his wife, Delilah Hash Miller; his parents, William and Edna Miller; his brothers, Carl Wayne Miller (Betty, deceased) and Leo William Miller; his sister, Shirley Temple Miller; and his daughter, Vanessa Renee Miller. He leaves to cherish his memory a loving family; his son, Reuben D. Miller (Gloria); his sisters, Helen McArthur (Maurice) and Shelva Houston (Jimmy, deceased); 4 grandchildren, 5 great grandchildren and a host of nieces, nephews, cousins, friends, and his dear Aunt Ruby. Rest on, Deacon Miller. Enjoy basking in the presence of God and the angels as you dance with the loved ones who entered heaven before you. Drink all the Pepsi-Cola you want! You will be missed. A public viewing will take place today Monday, July 13, 2020 from 2pm until 5pm at Douthit's. A private funeral services will take place Tuesday, July 14, 2020 and Entombment will follow in Piedmont Memorial Gardens Douthit's.Arrangements are in the care of Douthit Funeral Services.

Deacon Alvin Lewis Miller, 85, of Winston Salem, NC, transitioned from earth into his eternal home on July 08, 2020 after a long battle with cancer. He was born in Barren Springs, Virginia on October 10, 1934 to loving parents, William Durando... View Obituary & Service Information

The family of Mr. Alvin L Miller created this Life Tributes page to make it easy to share your memories.

Send flowers to the Miller family.