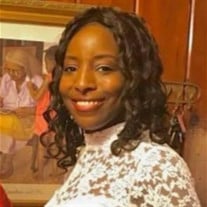 Beta Valette Caesar was born on November 15, 1978 to Joseph S. Tart Sr. and Ann C. Lyerly in Winston-Salem, NC. After a courageous battle with lung disease that she fought with grace and dignity she transitioned from this life to the next on November 1, 2020. Beta attended Parkland High School where she was an exceptional student and participated in several clubs and extracurricular activities. She was student body president and elected as homecoming queen during her senior year class of ‘97. After graduating from Parkland High School, she went on to attend North Carolina Central University where she pledged Delta Sigma Theta. She was elected president of the Alpha Lambda Chapter of Delta Sigma Theta Sorority, Incorporated 1999-2000. She graduated from North Carolina Central University with a double major in Political Science and English. She also holds a Master's Degree in Business Administration, and a Master's Degree in Political Science both from Strayer University. She went on to work in the finance industry for over 20 years. She was a Wealth Mortgage Processing Manager II, AVP at BB&T. Beta had a profound love of family. She was taught by her Uncle Piggy to always know who her family was and to be there for them. Beta grew up in a spiritual family. She accepted Christ as her Lord and Savior along with her sister Courtney and Uncle Alan in her grandmother’s basement at the age of 12. She shared her love of God with everyone she knew and was known for sending positive spirit filled scriptures through text messages throughout the day. There are no words to describe how much she will be missed, but our faith teaches us she is in a better place. Beta leaves to cherish fond memories: one son, Warren Terry, Jr. (Warren Terry, devoted father) of Greensboro, father, Joseph S. Tart Jr. of Winston-Salem, mother, Ann C. Lyerly of Greensboro, grandparents, Jimmy Caesar and Mozelle Caesar of Winston-Salem, two sister, Courtney James (Gregory) of Winston-Salem and Joella Washington, five nieces and nephews, Malique Johnson, Lillie Johnson, Gregory Johnson, Joshua Ingram, Jr., and Talmadge James all of Winston-Salem, five uncles and aunts, Steven “Piggy” Caesar (Pam), Alan Caesar (Deborah), Chris Caesar, Daran ”Speedy “Caesar, Ronald “Charlie” Caesar, deceased, (Val), and Joann” Dip” Dobson, deceased, all of Winston-Salem, five life-long sister friends, Monica Driver, Kia Chavious, Alicia Tarrant, Felicia Richardson (Rashem), and Tamara Akinbo all of Winston-Salem, and a host of other close relatives and friends. Also, an incredibly special thanks to Cousin James Davis and Tanisha Davis for their tireless devotion and care until the end. A public viewing will be held Monday, November 9, 2020 from 1pm until 5pm at Douthit's. Funeral services will be Tuesday, November 10, 2020 at 1pm from Love Center Church 3980 N. Liberty Street Winston-Salem, NC. Arrangements are in the care of Douthit Funeral Services.

Beta Valette Caesar was born on November 15, 1978 to Joseph S. Tart Sr. and Ann C. Lyerly in Winston-Salem, NC. After a courageous battle with lung disease that she fought with grace and dignity she transitioned from this life to the next on... View Obituary & Service Information

The family of Ms. Beta Valette Caesar created this Life Tributes page to make it easy to share your memories.

Send flowers to the Caesar family.