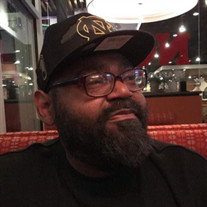 Bobby Ray Jones, better known as Bob, transitioned unexpectedly on, Wednesday, August 26th 2020. Bob is preceded in death by his loving parents, Elvie Jerry Jones and Sarah Lee Barnes. He is survived by his wife, Ebony, his stepchildren, Kennedy and Lindsey, his Sister, Ricci Jones Alford and many friends who were his family. Bob was born November 11, 1975 in Winston Salem, NC. He graduated from West Forsyth High School in 1994 and attended Livingston College, where he played football and majored in Computer Science. He later became an OTR truck driver. Bob was an incredible human being. He had an old soul with a playful heart. He made an impact on any one he met. His smile could brighten any room and his laughter was soothing. He would always lend a listening ear and hold your secrets as his own. He was affectionately called Bear by his wife because even though he was large in statute, he was so loving and compassionate. Bob had a passion for history, politics and nature. He made sure he was well versed in facts because he hated to be wrong. He proudly wore his UNC and Cowboy’s attire and wouldn’t hesitate to tell anyone that they were the best in the league. He loved life and didn’t believe wasting time. He understood the concept of “When it’s your time, it’s your time” and “Do what you love, because life is too short”. He was the last of a dying breed and upheld ethics and behaviors of a true gentleman. He believed his word was his bond and would protect his family and friends by any means. Anyone who truly knew Bob, knew he missed his mother. So, we should all find comfort in knowing they are now reunited. There will never be another Bob and his legacy will live on forever. A public viewing will be held Friday, September 4, 2020 from 2pm until 5pm at Douthit's. A private service will take Saturday, September 5, 2020 at Douthit's. MASK ARE REQUIRED!

The family of Mr. Bobby Jones created this Life Tributes page to make it easy to share your memories.

Send flowers to the Jones family.