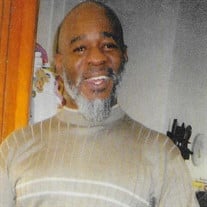 Calvin Lewis Weaks departed from this life to a Supreme destination on Tuesday, March 1, 2022. He was born to the late Otis Clinton Weaks and Jennie Mae Pinkney Weaks on December 11, 1949, in Winston Salem, NC. He was preceded in death by his parents, two sisters, Deloris Weaks, and Gail (John) Weaks Witherspoon, two brothers, Otis Clinton Weaks Jr., and Randy Cardell Weaks, and one devoted nephew, Kenneth (Sylvia) Pinkney. Calvin was a loving husband, father, father-in-love, grandfather, brother, uncle and friend, who dedicated his life to serving the Lord, and making others feel loved and cared for in his own special and unique way. He was selfless and he always looked to put a smile on someone’s face. He was a graduate of Atkins High School, and he went on to gain an associate degree in accounting, and he retired from Forsyth Hospital after working there for many many years. He was a lover and student of quartet music. He created, sang and recorded with several groups such as The Gospel Supremes, The Mellow tones, and The Winston Salem Spiritual Aires among other groups. He is survived by his loving and devout wife of 52 years, Mrs. Jerrilyn Weaks, one loyal and faithful daughter, Natarshia (Lorenza-devoted son-in-love) Weaks Wolfe, one son, Dalren Smith; eleven grandchildren- Trenton, Kewan, Kimberly, Deeaira, Sarah, Alvin (Brittany), Pa’Shara, Dalren Jr., Esau, Shania, Aamyria; thirteen great grandchildren; loving and adoring siblings-Angelis Wolfe, Kimpie (Roger) Thompson, Pricilla Weaks, Barbarette (Nathan) Jeter, Marvin (Kindra) Weaks; Phil Williford, a dedicated best friend of 60 years; and a constant cousin, Ganine Ali; and a host of nieces, nephews, cousins and many other devoted friends who all adored him. Funeral services will be held Tuesday March 8, 2022, at 12pm from Winston-Salem First and interment will follow in Crestview Memorial Park. Family will receive friends at 11:30am at the church. A public viewing will be held Monday March 7, 2022, from 1pm until 5pm at Douthit's. Arrangements are in the care of Douthit Funeral Services.

Calvin Lewis Weaks departed from this life to a Supreme destination on Tuesday, March 1, 2022. He was born to the late Otis Clinton Weaks and Jennie Mae Pinkney Weaks on December 11, 1949, in Winston Salem, NC. He was preceded in death by his... View Obituary & Service Information

The family of Mr. Calvin Weaks created this Life Tributes page to make it easy to share your memories.

Calvin Lewis Weaks departed from this life to a Supreme destination...

Send flowers to the Weaks family.