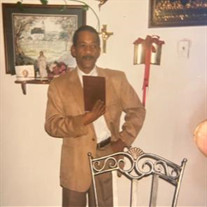 Mr. Christopher A. Brown, 62, the son of Blanche Brown Anderson and Maceo Campbell was born December 20, 1958 in Winston Salem, NC. Mother was blessed to move to her final home leaving all her flowers in her garden. Eight years later God saw fit to dispatch an angel to pick the first flower from her beautiful garden on Resurrection Sunday, April 4, 2021 to take him to his Heavenly Home. At the time his angel was dispatched he was surrounded by family and loved ones, and knowing now that it is well with his soul he is walking around Heaven all day. For many years, he was well known for his craft and character as a professional barber. He was known to make house calls always being punctual. Chris was a loving father, grandfather, brother, uncle, and friend. He attended Winston-Salem Forsyth County Schools and was a graduate from North Forsyth. He was preceded in death by his mother Blanche Brown Anderson and father Maceo Campbell, two brothers, Darren and Stanley Campbell. He leaves to celebrate his life two daughters Natasha Anthony and Dorothy Thomas, four grandchildren, Justin and Jada Anthony, Blessed Logan, and Serenity Thomas, fourteen siblings, Susan Wilson (Donald), Willie Brown (Debra), Edward Brown, Sr. (Carrie), Gwen Whitaker (Alex), Aldina Richardson (Marty), James Frazier (LaTronda), Derran Frazier, Cheryl Brown, Vernon Brown (Sonya), and Clara Brown with whom he resided, Roy Campbell, Maceo Thomas, Shericia Thomas, and Domnique Campbell, and a host of devoted nieces, nephews, cousins, and dear friends. He was cared for by his loving and devoted family that has carried a heart of gold while caring and loving for him during his time of need. He was highly respected by the community enlarge. A public viewing will be held Friday, April 9, 2021 from 1pm until 6pm at Douthit's. Graveside services will be conducted at Crestview Memorial Park, Rural Hall, NC on Saturday, April 10 at 11 a.m. Family will leave from his resident, 3908 Waddill Street, Winston-Salem. Arrangements are in the care of Douthit Funeral Services

Mr. Christopher A. Brown, 62, the son of Blanche Brown Anderson and Maceo Campbell was born December 20, 1958 in Winston Salem, NC. Mother was blessed to move to her final home leaving all her flowers in her garden. Eight years later God saw... View Obituary & Service Information

The family of Mr. Christopher Brown created this Life Tributes page to make it easy to share your memories.

Mr. Christopher A. Brown, 62, the son of Blanche Brown Anderson...

Send flowers to the Brown family.