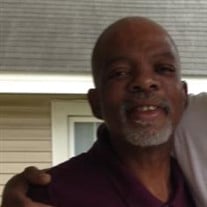 Dana Lee Brown, 56 years of age, passed away on Tuesday, January 5, 2021 in his home. Dana was born October 25, 1964 in Raleigh, North Carolina to the late Willis Junior Brown and Argather Anderson Brown. He was educated at Enloe High School of Raleigh, North Carolina. Dana moved to Winston Salem, North Carolina and work as a store clerk for several years until becoming a double amputee. He enjoyed basketball, football, listening to old school music and watching horror movies. He loved people and never met a stranger. Dana had a warm and kind spirit and would do anything for anyone. Dana is survived by his grandson, Tavin Burnette of Raleigh, NC, his brothers James Brown, Mike Brown(Edna Brown) and sister Tina (Brown) Baldwin (Roger Baldwin), his children Tamika Conyers, Dana Brown, Jr. and Althia Giles and a host of nieces, nephews, family and friends. Dana is preceded in death by mother and father Argather Anderson Brown and Willis Junior Brown. The family of Dana Lee Brown would like to thank Douthit Funeral Service and Wake Forest Baptist of Winston Salem, North Carolina. Fill not your hearts with pain and sorrow, but remember the joy, the laughter, the smiles. I’ve only gone to rest for a while. Although my leaving causes pain and grief, my going has eased my hurt and given me relief. So, dry your eyes and remember me, not as I am but as I used to be. Because, I will remember you all and look on with a smile. Understand in your hearts, I’ve only gone to rest a while. As long as I have the love of you. I can live my life in the hearts of all of you. A private memorial service will be held Saturday, January 16, 2021. There will be no public viewing. Arrangements are in the care of Douthit Funeral Services.

Dana Lee Brown, 56 years of age, passed away on Tuesday, January 5, 2021 in his home. Dana was born October 25, 1964 in Raleigh, North Carolina to the late Willis Junior Brown and Argather Anderson Brown. He was educated at Enloe High School... View Obituary & Service Information

The family of Mr. Dana Lee Brown created this Life Tributes page to make it easy to share your memories.

Send flowers to the Brown family.