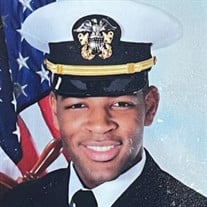 DJ our hearts are brokened and we are so very sad. You always made us proud parents and we are grateful. We will always love you forever son. REST IN HEAVEN, Love Mom and Dad! David Earl Wardlow, Jr., was born January 29, 1989 in Winston-Salem, NC to Vera Hart Wardlow and David Earl Wardlow, Sr. He unexpectedly and peacefully slept away on November 25, 2021. David (DJ) excelled academically through elementary, middle and high school. He graduated in the top 10 of his class from Robert B. Glenn High School in 2007. He continued his education at North Carolina Agricultural and Technical State University (NCA&T) graduating Magna Cum Laude with a Bachelor of Science Degree in Civil Engineering in 2011. While at NCA&T he was a member of the Marching Band, Civil Engineering Honor Society, NCA&T Honors Program, NCA&T College of Engineering Home Program, Alpha Lambda Delta National Academic Honor Society, and Alpha Delta Epsilon Civil Engineering Honor Society. He was elected to Who's Who Among Students in American Universities or Colleges in 2011. While attending NCA&T David (DJ) was recruited by the US Navy to attend Officers Candidate School for Civil Engineering after graduating. He became a Commissioned Officer in the US Navy. During his tenure in the Navy, he rose to the rank of 1st Lieutenant, overseeing a Department in the Civil Engineering Public Works Division in Millington Tennessee. David (DJ) was a member of Galilee Missionary Baptist Church from his early childhood and teenage years up through college participating in several of the children and young adult activities. Even after traveling all over the country or world he kept close contact with the church. He was presently a member of The Life Church in Memphis Tennessee. DJ was an outstanding, humble and kind young man. He leaves to cherish his love and memories, his parents, David and Vera Wardlow, Sr., a host of aunts, uncles, cousins, other family members, church members and friends. In lieu of flowers, the family requests that donations be sent to a scholarship fund established in his memory at North Carolina A & T State University. The family acknowledges with grateful appreciation and sincere thanks for all the expressions of love and the many acts of kindness shown during the unexpected death of our loved one. We would like to extend special thanks to Pastor Nathan Scovens, Galilee Missionary Baptist Church, Derek Wilson, Douthit Funeral Services and “David’s Crew." A public viewing will be held Saturday, December 11, 2021 from 1 -5 p.m., at Douthit's. Funeral service will be held Sunday, December 12, 2021 at 2 p.m., from the Galilee Missionary Baptist Church and interment will follow Monday, December 13, 2021 at 10:00 a.m. at the Salisbury National Cemetery. The family will receive friends at 1 p.m., at the church. Arrangements are in the care of Douthit Funeral Services.

DJ our hearts are brokened and we are so very sad. You always made us proud parents and we are grateful. We will always love you forever son. REST IN HEAVEN, Love Mom and Dad! David Earl Wardlow, Jr., was born January 29, 1989 in Winston-Salem,... View Obituary & Service Information

The family of Mr. David Wardlow Jr created this Life Tributes page to make it easy to share your memories.

DJ our hearts are brokened and we are so very sad. You always...

Send flowers to the Wardlow family.