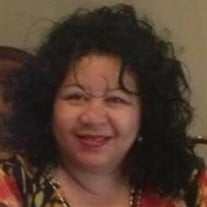 Deloise (Virginia) Allen Nelson passed away on Thursday, April 1, 2021 in her home surrounded by the love of her family. She was born on May 1, 1953 to the late Jack and Janet Allen in the town of Walnut Cove. She resided at 5135 Sheffield Place Drive in Kernersville with her husband, friend, and true love, Jack Elijah Nelson. Deloise Nelson graduated from Atkins High School in Winston-Salem where she was voted “Best Looking”. She drove buses for the Winston-Salem Forsyth County School System before going to work with ARA where she was employed until she began her own business (His Glory Hair Boutique) as a licensed Cosmetologist, which she operated successfully for years. Deloise Nelson was Co-Pastor of Love Fellowship Deliverance Church and a gifted and anointed prayer warrior and songstress. Before her health began failing she attended Life Changing Transformation Church Ministries where Alice Faye Mitchell is the Pastor, her faithful and loyal best friend, and her sister in Christ. Deloise was a dedicated mother first and foremost. She treasured her children and embraced every moment with them. She especially loved her role as Nanny to her grandchildren. She had a vivacious personality and always made people around her laugh. She made friends everywhere she went and always had a beautiful smile and an encouraging word. Her life was a living example of her favorite Bible verse, Ephesians 4:32 — “And be kind and compassionate to one another, forgiving one another, just as God also forgave you in Christ.” Deloise Nelson was preceded in death by her sister Janet (Rita) Connor and her brother-in-law Leroy Nelson, and grandson Mason Nelson. She leaves to cherish her memory, husband, Jack E. Nelson; brother, Donald Allen; brother-in-law, Joseph Nelson; sister-in laws, Alberta Jackson, Patricia Rhyne, and Tina Nelson; sons, Bobby Holland II, Derrick Holland, Micah Nelson (Shaquira), Bryan Cunningham, William Corey Thomas (Tori), and Leroy Collins (Vardrena); many God-given adopted sons and daughters; twenty-five grandchildren; four great grandchildren; and a host of nieces, nephews, great-nieces, great-nephews, cousins, family, and friends. A public viewing will be held Friday, April 9, 2021 from 1pm until 6pm at Douthit's. Funeral services will be conducted Saturday, April 10, 2021 at 1:30 from St. Stephen Missionary Baptist Church. The family will receive friends from 1:00pm until 1:30 at the church. Arrangements are in the care of Douthit Funeral Services.

Deloise (Virginia) Allen Nelson passed away on Thursday, April 1, 2021 in her home surrounded by the love of her family. She was born on May 1, 1953 to the late Jack and Janet Allen in the town of Walnut Cove. She resided at 5135 Sheffield... View Obituary & Service Information

The family of Mrs. Deloise Nelson created this Life Tributes page to make it easy to share your memories.

Send flowers to the Nelson family.