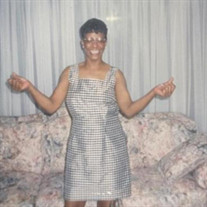 Mrs. Dorothy James Marlin (Dot, known by her family and close friends) of 542 Linville Road, Kernersville, NC passed away on Sunday, October 10, 2021. She was born on September 12, 1949 to the late A. Q. Page and Martha T. Page in Lumberton,... View Obituary & Service Information

The family of Mrs. Dorothy J. Marlin created this Life Tributes page to make it easy to share your memories.

Send flowers to the Marlin family.