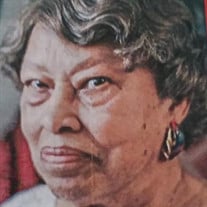 Eleanor Ann Rice Harris was born on December 25, 1919 to Lumas and Agnes Rice in Sedalia, SC.  She attended the local Winston-Salem schools until her early teens and later worked for R.J. Reynolds for several years. She then moved to Washington, DC where she pursued a career as a licensed practical nurse until she returned to Winston-Salem in the late 1960s.  Mrs. Harris was a faithful member of Greater St. Matthews Baptist Church for over 30 years where she was a missionary, choir member, and Mother of the Church. She was married to the late Reverend Spurgeon B. Stevenson, to which union was born eight children.  She was preceded in death by her second husband and love of her life, Asia Harris, and two children, Margaret Diane Stephens and Blondean Stevenson Foster. She is survived by six children: Vivian Walters, Mary King, Spurgeon O. Stevenson (Sandra), Bendetta Stevenson, Wanda Stevenson Cager of Winston-Salem and Gladys Patten of Los Angeles, Caligornia; 22 grandchildren and a host of great- and great-great-grandchildren. Ms. Harris was a feisty, strong-willed and graceful woman.  She never hesitated to offer her opinion on any subject, yet she was compassionate and strived to center her words and actions around God’s will. She loved her children and was especially close her grandchildren. She enjoyed cooking for her family, especially on Sundays when they would visit her after church services. She spent her retirement years working in her vegetable garden, doing crossword puzzles, working for the church, and reading her Bible. In her later years, she was cared for by family members including Sandra Brown Stevenson who visited Mrs. Harris faithfully and tended to her needs. Funeral services will be conducted Saturday, August 12, 2017 at 3:00 PM from Greater St. Matthew Baptist Church. The family will receive friends from 2:00 PM until 3:00 PM at the church. The remains may be viewed on Friday, August 11th from 2:00 PM until 6:00 PM at Douthit's. The family would like to thank the staff at Oak Forest Health and Rehabilitation for the kindness and care they provided during her residency.

Eleanor Ann Rice Harris was born on December 25, 1919 to Lumas and Agnes Rice in Sedalia, SC.  She attended the local Winston-Salem schools until her early teens and later worked for R.J. Reynolds for several years. She then moved to Washington,... View Obituary & Service Information

The family of Eleanor Ann Rice Harris created this Life Tributes page to make it easy to share your memories.