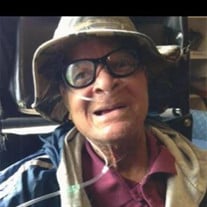 2 Timothy, 4:7 “I have fought a good fight, I have finished my course, I have kept the faith”. Henceforth, there is laid up for me a crown of righteousness…” Mr. Henry Edward Harris (aka) “REDDOG”, age 70 gained his heavenly wings after an extensive stay in a caring and loving community Trinity Glen Assisted Living in Winston-Salem, NC on September 23, 2020 from Colon Cancer. Henry was born on July 9, 1950 to the late Henry Harris and Willie Mae Hammond Harris in Danville, VA. Henry was Baptist by faith and attended church service at Trinity Glen. He was a 1968 graduate of John M. Langston High School in Danville; VA. He continued his education at Barber Scotia College in Concord, NC. He moved to Winston-Salem, NC in 1969. He was married to Rita Adams Harris for 42 years and they lived in the Stonewall Community, before being placed in Trinity Glenn in 2003. He was employed with R. J. Reynolds Tobacco Company #12 as a mechanic from 1970 until he became disabled due to a motorcycle accident in 1977. Reddog loved a good laugh and enjoyed playing spades, bid whist, and board games. He was a man that always helped you if you asked. His enjoyment was watching television while holding his remote in his hand, listening to his radio, and smoking until Trinity Glen made him quit in 2011. In addition to his parents he was preceded in death by his devoted and caring wife Rita M. Adams Harris, niece Audrey Harris, in-laws Releist (Jack) and Margie Adams, two sister-in laws Javone Adams Rice and Inese Adams Williams, two brother in-laws Hurbie M. Adams and Bobby Williams. Henry leaves to cherish fond memories: two sisters, Veronica L. Thompson (Toney) of Ernul NC, and Wanda Faye Smith (Larry), niece Antoinette M. Bland (Alex) both of Danville, VA, nephew Brian L. Harris of Washington, DC, great nephew Derrick D. James of Danville VA. His close In-Law Family----four sister in-laws Mayor Pro Tempore Denise (DD) Adams, Tunisia A. Dodd (Chris), Jerlene Adams, and his devoted and loyal care giver Tanya L. Adams all of Winston-Salem, NC and host of other relative and friends. A public viewing will be held Friday, October 2, 2020 from 2pm until 6pm at Douthit’s. A private funeral service will be held Saturday, October 3, 2020. Interment will follow in the Family Plot of Evergreen Cemetery. Arrangements are in the care of Douthit Funeral Services.

The family of Mr. Henry Edward "REDDOG" Harris created this Life Tributes page to make it easy to share your memories.