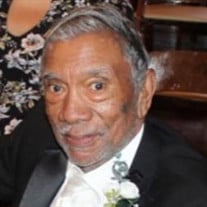 “Blessed is the man who walks not in the counsel of the ungodly, nor stands in the path of sinners, nor sits in the seat of the scornful; But his delight is in the law of the Lord, and in His law he meditates day and night.” Psalms 1:1-2 Mr. Henry Aven Jones, Jr., 87, son of the late Henry Jones Sr. and Bertha Pullen was born on August 14, 1932 in Rocky Mount, NC and resided in Winston-Salem, NC for 25 years. He departed this life on July 5, 2020 at Forsyth Hospital in Winston-Salem, NC at 1:33 am. Henry Jones spent his young childhood in Nash County, NC with his siblings, the late Catherine Jones, Bernice Jones, and Geraldine Jones. In the mid 40’s, his family moved to Brooklyn, NY. There he attended East New York Vocational High School. After graduating high school, Henry joined the US Airforce in 1952. While in the Airforce, he toured Greenland, Newfoundland, and Lavador. Upon leaving the Airforce in 1958, Henry return to New York to work at the Federal Reserve Bank of New York in the Treasury Department. Little did he know that he would return to meet the love of his life, Doris Marie Evans. Henry and Doris married on July 10, 1965. They were unable to have children of their own, but with lots of love to give, they adopted a little girl on February 15, 1989. When Shanice Marie Jones entered into their lives and hearts, Henry decided then to retire from the Federal Reserve Bank of New York after 34 years. The Jones’s decided to leave the hustle of the city and move to Winston-Salem, NC in December 1994. Henry, Doris, and Shanice became members of Calvary Baptist Church. He was an employee of Target until his wife became ill and he retired again after 17 years in 2017. He spent his remaining years at home cooking and watching old western cowboy movies. He was laid back and easy going. He never complained, not even on his last living day in the hospital. He was looking forward to becoming a grandfather in December 2020. Most importantly, he truly loved his wife and his daughter. He leaves to cherish his memory his wife Doris Marie Jones with 54 years of marriage; his daughter, Shanice Marie Davis; a son-in-law, Austin Lamar Davis; three nieces, Tonya Marie Evans, Daphne Darnell Chisolm, Valerie Levins; a God-niece, Joyce Allen; a nephew, Steven “Boobie” Jones; nephew-in-law, Samuel Chisolm; a God-nephew, Victor Allen; three grand-nephews, Richard Roberts, Bryan White, and Nicolas White; two grand-nieces, Arielle Chisolm and Karon Rice; a great grand-niece, Mya White; a future grandchild; and a host of other nieces, nephews, relatives, and friends A graveside services will be held Thursday, July 9, 2020 at 2pm from Salisbury National Cemetery. There will be no public viewing.

&#8220;Blessed is the man who walks not in the counsel of the ungodly, nor stands in the path of sinners, nor sits in the seat of the scornful; But his delight is in the law of the Lord, and in His law he meditates day and night.&#8221; Psalms... View Obituary & Service Information

The family of Mr. Henry Aven Jones ,Jr created this Life Tributes page to make it easy to share your memories.

“Blessed is the man who walks not in the counsel of the ungodly,...

Send flowers to the Jones family.