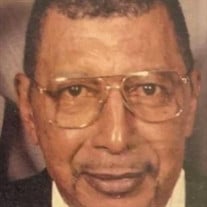 Howard Junious Rodgers, 84, passed away peacefully on January 13, 2022. He was a kind and loving son, brother, uncle, and a dear friend to so many; he will be sadly missed. Howard was named after his grandfather and was the eldest of four sons, born July 22, 1937, in Winston-Salem, NC, to the late Willie & Sallie Rodgers. Howard was baptized in 1948 by Evangelist Elder E. E. Cleveland. He served as the head of the male usher board and sang in the youth choir at Ephesus SDA Church. He was a gifted honor student, he attended Woodland Ave and 14th Street Elementary Schools, and graduated from Atkins High School in 1955. After that, Howard attended Oakwood College in Huntsville, AL, to major in pre-med. In 1956 he entered the United States Air Force and served honorably. From there, he attended North Carolina A&T, Winsalm College, and later received an Engineering Technology Degree (HVAC) from Forsyth Tech in 1995. Throughout his career, he was employed with General Motors in California, RJ Reynolds, Integon Insurance, and A&P Mechanics in North Carolina. Howard truly lived life to the fullest through simple pleasures; he was well-liked by all and lived as a free spirit and had the uncanny ability to reach people in a deep and positive way. He leaves to cherish his memory: beloved friend Barbara Lybrand; brothers, Joe (Shirley) Rogers, Emanuel (Shirley) Rodgers; daughters, Sherri Kay, Etashya Rodgers; adored goddaughter Jalaine Gethers; sons, Andre’ Rodgers, LeBaron (Kelly) Rodgers, Chevalier Rodgers, Daniel Rodgers, Kevin (Angela) Mumford, Christopher Mumford, Deboris Black; a host of grandchildren, great- grandchildren, nieces, nephews, cousins, other relatives, and friends. Howard was predeceased by his wife, Barbara Rodgers, and brother Willie Rogers A public viewing will be held Monday, January 24, 2022, from 1pm until 5pm at Douthit's. Funeral services will be held Tuesday, January 25, 2022, at 12pm from Ephesus Seventh Day Adventist. Arrangements are in the care of Douthit Funeral Services. https://www.youtube.com/channel/UCL8F_FYDfi-27_o9jfvO7Dg

Howard Junious Rodgers, 84, passed away peacefully on January 13, 2022. He was a kind and loving son, brother, uncle, and a dear friend to so many; he will be sadly missed. Howard was named after his grandfather and was the eldest of four sons,... View Obituary & Service Information

The family of Mr. Howard Rodgers created this Life Tributes page to make it easy to share your memories.

Send flowers to the Rodgers family.