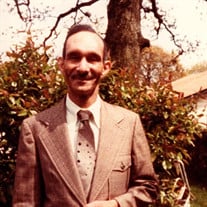 Mr. James Payne Brooks, age 75, affectionately known as “Tiny”, was born February 23, 1942 in Forsyth County, North Carolina. He departed this life to eternal reward on Sunday, November 12, 2017 at K.B. Reynolds Hospice Home. He was a retiree of Novant Health Corporation at Forsyth Memorial Hospital, Environmental Services Department. He was a lifelong member of Shouse Temple C. M.E. Church, where he served on the Senior Choir and helped with the Trustees until his health failed. He was preceded in death by his parents, James and Callie Payne Brooks; one sister, Tyler Ann Brooks; and brother-in law, Rev. Dr. L.V. Stennis. He is survived by one sister of the home, Vicki Brooks Stennis; cousins, Arthur E. Payne, Arthur Jarrett (Angie), Robert Jarrett (Claudette), Mary Jane Causer, and George Lee Brooks (Lucille); God daughters, Erica Lowery and Rev. Angela Brown; special friends, Rosemary Chavis, Evetter Culcleasure and Bonnie Henderson. A special thanks to the doctors, nurses, CNA’S, and staff at K.B. Reynolds Hospice and Palliative Care Center. The family requests that in lieu of flowers, memorial contributions be made to Hospice in memory of James Payne Brooks. Funeral Services will be conducted on Saturday, November 18, 2017 at 12pm from the chapel of Douthit Funeral Services. Interment will follow at Piedmont Memorial Gardens. Family visitation will begin at 11am until the time of service. Mr. Brooks may be on Friday, November 17, 2017 from 2pm-6pm at the funeral home.

The family of James Payne Brooks created this Life Tributes page to make it easy to share your memories.

Send flowers to the Brooks family.