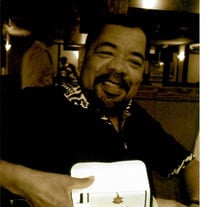 Our Heavenly Father has called home our beloved James Arthur Myers, 60, of Winston-Salem, NC. He made his transition on Monday, June 8, 2020 at Wake Forest Baptist Hospital. Born in Forsyth County on October 22, 1959, James was the son and eldest son of the late James and Nellie Huntley Myers. He was united in matrimony to Karen Johnson Myers on May 6, 1989 and they remained devoted to each other until his passing. Mr. James Arthur Myers graduated from Reynolds High School in 1978, He joined the branch of the United States Air Force and served as a Senior Airman. He received a Honorable Discharge, on December 29, 1985 . After completing his time with the United States Air Force,he was employed at Centenary Church and with Northwest Council of Government as a Service Corps Crew Leader until his health began to fail in December of 2015. James was a faithful active member of St. Stephen Missionary Baptist Church. He served on the Trustee Board and was a devoted member of the Surveillance Ministry. James will be remembered as a gentle man with a calm and quiet demeanor, always willing to lend a helping hand, his impeccable fashion sense and for his cooking skills in the kitchen and on the grill. He was known to fry up a delicious and crunchy batch of chicken wings and known for his participation with several fish fries at the Winston-Salem State football games. He leaves to cherish fond memories of his devoted wife Karen and one son, James Brandon Myers, his loving and devoted mother from beginning to the end, Nellie Myers; two sisters, Cynthia Brown (Eric) Sandra Sherard (George); two brothers Kenneth Myers and Aldophus Myers; a loving father in law Billy Joe Johnson of Shelby; two brother-in-law Toby Johnson of Shelby NC and Billy Johnson of Gaffney SC a host of nieces and nephews, other relatives and good friends. A public viewing will be held on Sunday, June 14, 2020 from 2pm until 5pm at Douthit's. A private funeral service will take place on Monday, June 15, 2020 at St. Stephen Missionary Baptist Church followed by interment at Salisbury National Cemetery on Tuesday, June 16, 2020.

Our Heavenly Father has called home our beloved James Arthur Myers, 60, of Winston-Salem, NC. He made his transition on Monday, June 8, 2020 at Wake Forest Baptist Hospital. Born in Forsyth County on October 22, 1959, James was the son and... View Obituary & Service Information

The family of Mr. James Arthur Myers created this Life Tributes page to make it easy to share your memories.

Our Heavenly Father has called home our beloved James Arthur...

Send flowers to the Myers family.