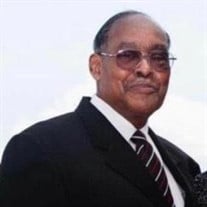 Deacon Emeritus James Nathaniel Wright, Jr. James Nathaniel Wright, Jr. affectionately known as “Del” was born November 5, 1940 and was a lifelong resident of Winston-Salem, NC. Our gracious God welcomed him into Glory on Thursday, April 28, 2022, at the age of 81. He was born to the late James N. Wright, Sr and Elizabeth M. Wright. . “Del” as he was lovingly called by his family and close friends, graduated in 1958 from Carver High School, WS NC, He attended WSSU; and graduated from Piedmont Bible College. In his early employment, he was an apprentice surveyor with the Otis Jones Surveying Company in Winston-Salem, NC for several years. He was later employed by the Forsyth County Health Dept. in the Environmental Service Dept. He was a retired employee of Piedmont Airlines/USAir after 25+ years of service. His after retirement he dedicated 11 years to his part-time employment with Chick-fil-a. In addition to his parents, brothers Carl B. Wright, Michael N. Wright, and Kenneth S. Wright, Ronzonie Wilds (Nephew), Junior Vanllue (God-grandson), predeceased James, Jr. James, Jr. leaves to cherish his memory, his spouse of 57 years and the love of his life, Linda Ingram Wright, 2 daughters Michelle Wright and Monique Wright and one son, James N. Wright, III (Yolanda); 7 grandchildren, Kristen Wright, Emily Wright, James N. Wright, IV, John Michael Wright, and Dion Wright, Courtland (Symone) Carson, and Ja’Lisa Vanlue; 2 great grand-children, Brayden Wright and Cameron Wright. His siblings: one brother John A. Martin (Hyacinth) of New Haven Ct; 2 sisters, Kay Wright-Norman (Bryant) of Salisbury, NC; and Nancy Wright Green of Winston-Salem, NC. Other relatives include an aunt, Carolyn Wright, two sisters-in-law, Mrs. Geneva Wright and Mrs. Harriett I. Rodriguez; 22 nieces and nephews, a host of cousins and numerous friends. James was a Bible scholar, studying and attending training classes of the Congress on Christian Education, auxiliary of the General Baptist State Convention of NC; an excellent Bible teacher, an avid reader, he enjoyed gardening, fishing, and was a sports enthusiast. He was the number one fan of his grandsons, James N. Wright, IV when playing football at East Texas Baptist University in Marshall, Texas and his grandson, JohnMichael Wright who plays basketball for High Point University, High Point, NC. James was a lifelong member of Dreamland Park Baptist Church. He dedicated his life to Christ at an early age through Vacation Bible School at Dreamland. His service in church began with him singing in the Choir and continued for more than 65 years. He served as a Sunday School teacher, later becoming the Sunday School Superintendent for more than 45 years; served as a Deacon for more than 50 years and recently was honored and elevated to the status of Deacon Emeritus. He was a practicing Missionary and served as President of the Missionary Circle at Dreamland for several years. He loved the Lord and lived his life for Christ as in his theme song, “I will trust in the Lord, Until I Die”. He served, supported, and attended his church regularly until his declining health within the past two years did not allow him to attend regularly. His membership and service in Christian organizations include, serving six years as President of the Forsyth County Sunday School Union, a member of the Forsyth County Deacons’ Union. In the Community, he was a member of the Carver HS Class of 1958 Reunion Planning Group. “Del” was a man of great integrity and honesty. He always wore a warm smile and he never met a stranger. He was a loving and kind son, brother, husband, father, uncle, grandfather, great-grandfather and friend. All who were blessed to have known him will immensely miss him. He was a blessing and a treasure to all of us!!!! My work here is finished . . . Farewell for now! I have a new address—HEAVEN. A public viewing will be held Friday May 20, 2022 from 1pm until 5pm at Douthit's. Funeral services will be held Saturday May 21, 2022 at 12pm from Dreamland Park Baptist Church. The family will receive friends at 11:30am. Arrangements are in the care of Douthit Funeral Services.

The family of Deacon James Wright Jr. created this Life Tributes page to make it easy to share your memories.

Send flowers to the Wright family.