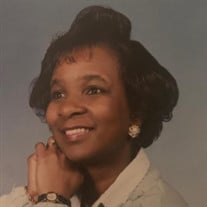 Janet Faye Clark Robinson Janet Faye Clark Robinson returned to her Heavenly home following a brief illness. She was preceded by her parents the late Franklin Clark and Elsie Fair, a brother, Franklin Fair and a daughter, Vicki LaVonne Robinson. Janet was born April 3, 1951 at Katie B. Reynolds hospital and grew up in the Boston area (The Pond). She was a 1969 graduate of Carver High School. Janet worked at Forsyth Memorial Hospital for 30 years as a unit secretary on the mother-baby floor. Before her illness, she also worked part-time for the City of Winston-Salem at the police training center on Trade St. Janet was a long time faithful member of The Fellowship Church, formerly known as Uncompromising Word Fellowship Church, where she served as a missionary and praise and worship singer. Janet loved the Lord with all of her heart, and wasn't ashamed to praise her Savior wherever she was! She was a caring and thoughtful neighbor, often checking on their well-being. She leaves to cherish her memory three children Don(Tricia) Robinson, Shawn (Lakeisha) Robinson and Tamara (Kris) Price, nine grandchildren, Tramela (Sean) Mosely, Dijon Watson, Gabrielle, Hannah, Don III, and Jordyn Robinson, Mi'yana Battle, Arien and Eden Price, three great grandchildren, AJ, Jamison, and Teigan Mosely, sisters Evelyn (Johnny) Puryear and Deborah Brown, one brother Clarence(Carolyn) Clark, a mother-in-love Barbara Goodin, very close friends Vickie Rhynes, Joan Jones, Cora Kimber, Patricia Alexander and a host of nieces, nephews, and cousins. We do not sorrow as those who have no hope, we know our mother is in the loving arms of her Savior. We love you mama, and we'll see you again at the Great Reunion! A private memorial service will be held Friday, November 13, 2020 at. There will no public viewing. Arrangements are in the care of Douthit Funeral Services.

The family of Ms. Janet Robinson created this Life Tributes page to make it easy to share your memories.

Send flowers to the Robinson family.