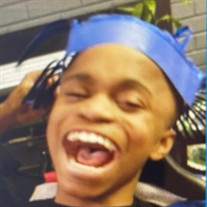 Jaravion Caleel Clemmons passed away, unexpectedly, at the age of 14 years old on Tuesday, August 4 th , 2021. Jaravion was known as “Momma’s Mann” and “Daddy’s JRay”. Jaravion touched so many peoples lives with that big smile and contagious laugh! He loved going to church, riding in the van with his family, swinging outside on his swing, going bowling on his birthdays, and he loved coming home after a long day of school, getting into his bed and finally laying down and taking a nap! Jaravion enjoyed listening to classical and relaxation music with the sounds of water quite often. He enjoyed watching Peppa Pig, Hey, It’s Franklin and Jack Hartman’s “Days of The Week” videos. He also enjoyed going to many DASH baseball games with his fellow classmates and teachers. Jaravion was an ambassador for Easter Seals UCP of North Carolina and Virginia for three years in a row. He participated as an ambassador in the Food Lion Shop & Care 20th Anniversary in Rowan, NC. Jaravion was also an avid bowler and competitor in the WSFCS Special Olympics throughout middle and high school. He is survived by his loving parents, Bishop Sammie Lee Clemmons Jr., and LaWanda Clemmons, as well as his sisters Tuccorra and LaKeisha, his brothers Dashawn and Tre’Von, his grandparents and lots of other relatives. Jaravion also has an extended biological family that resides in Salisbury, NC. Jaravion was a loving son and brother, and he will truly be missed! We love you always and forever, Momma’s Mann! A public viewing will be held Tuesday, August 10, 2021 from 1pm until 5pm at Douthit's. Funeral services will be held Wednesday, August 11, 2021. Arrangements are in the care of Douthit Funeral Services.

The family of Mr. JaRavion Caleel Clemmons created this Life Tributes page to make it easy to share your memories.

Jaravion Caleel Clemmons passed away, unexpectedly, at the age...

Send flowers to the Clemmons family.