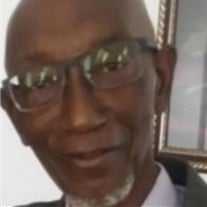 Mr. John Wesley Gentry of 1720 Woodstone Drive, Winston-Salem, North Carolina was born on September 17, 1945 in Yadkin County to Myra Gentry Graham and the late Wesley Gentry. He went to be with our Lord and Savior on May 19, 2021 peacefully at his home. Mr. Gentry graduated from Yadkin High School and later received certifications from Forsyth Technical Community College. John retired from Abitibi-Price after 32 years as a lead-man and supervisor. He would work for another 15 years as a Certified Nursing Assistant at Winston Salem Nursing Rehabilitation Center. John was a member of Union Chapel Baptist Church in Winston Salem, North Carolina where he faithfully served on the Layman's League and loved to attend Sunday School as much as his health would allow. He enjoyed planting a garden every year, traveling, and family get-togethers. His calm demeanor was a blessing to all who knew him, enduring him the nickname "Easy" to old friends. Left to cherish his memory are his beloved wife, Minister Rebecca Gentry. He is also survived by his honorable mother Myra Gentry as well as three daughters from a previous marriage; Terri Brown (Eric), Traci Murphy (Bruce), Tiffany Jackson (Steven). Also mourning Mr. Gentry's passing are devoted step-children; Joy Bediako (Prosper) and Joan Deeley (Jeffrey). He was also father to daughter Shontel Gist and son Tyrone Sales. He is also survived by his sister Thelma Martin (Willard), brothers in-law, Jessie Thomas and Billy Thomas (Georgia), and sister in-law Vennie Mack (Clarence). In addition to his adopted son Jon, he was preceded in death by his father Wesley Gentry, sister Gloria Allen and her husband Pastor John Allen, as well as a cherished uncle, John Arthur Lockhart. Mr. Gentry's memory will always be cherished by a host of grandchildren, great-grandchildren, nieces, nephews, and friends. Funeral service will be held Monday, May 24, 2021 at 1:30pm from Douthit's. The family will receive friends at 1:00pm. There will be no viewing on Sunday. Arrangements are in the care of Douthit Funeral Services.

Mr. John Wesley Gentry of 1720 Woodstone Drive, Winston-Salem, North Carolina was born on September 17, 1945 in Yadkin County to Myra Gentry Graham and the late Wesley Gentry. He went to be with our Lord and Savior on May 19, 2021 peacefully... View Obituary & Service Information

The family of Mr. John Wesley Gentry created this Life Tributes page to make it easy to share your memories.

Send flowers to the Gentry family.