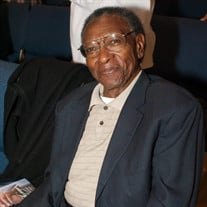 Mr. John Samuel Hanna Sr., passed away peacefully on Tuesday, March 9, 2021. Mr. Hanna was born to the late Katie Lee and Malachia Hanna on November 25, 1939 in Lake City, South Carolina.  He was preceded in death by his parents, his sisters Thelma Generette and Claretta Hanna, and his brothers Billy and Nelson Hanna. A devoted husband, Mr. Hanna was also predeceased by his wife Mrs. Carrie Bell Hanna, whom he loved and adored. Mr. Hanna was very good with his hands, always working in his yard and maintaining his house. He took pride in keeping Charles Court neat and clean, often manicuring neighbors’ grass and picking up litter. He taught his family to work hard at all costs, make memories by traveling and keep family first.   Mr. Hanna was a faithful member of First Waughtown Baptist Church. Even during periods of illness, he pressed his way to service. After coming to Winston-Salem from South Carolina, he worked at Winston Leaf. After working there, he went on to work at and retire from Carswell Distribution Company, dedicating over 40 years of service. He was also a member of Bivouac Lodge #503.  Left to cherish memories of his abundant life are his daughter and five sons: Katie Powell Edwards of Hemingway, SC; James Wallace of Winston-Salem; John (Deborah) Hanna Jr. of Lake City, SC; and Ronnie (Tammy) Hanna, Leon (Stephanie) Hanna, and Haywood (Angel) Hanna, all of Winston-Salem.  Loving survivors also include a host of grandchildren and great-grandchildren, whom he absolutely cherished. Mr. Hanna will also be remembered by his sisters: Rosa Nell (Walter) Singletary and Betty Graham, both of Lake City, SC; brothers: Frank (Glendora) Hanna and Larry (Rebecca) Hanna, of Lake City, SC; sisters-in-law Dorothy Lee, Rosa and Mable (Larry); brothers-in-law Tim, Randolph and Jimmy, along with several generations of other family members, including nieces, nephews, cousins, and friends. A public viewing will be held Sunday, March 14, 2021 from 1pm until 5pm at Douthit's. A private funeral will be held Monday, March 15, 2021 and interment will follow in Piedmont Memorial Gardens. Arrangements are in the care of Douthit Funeral Services.

Mr. John Samuel Hanna Sr., passed away peacefully on Tuesday, March 9, 2021. Mr. Hanna was born to the late Katie Lee and Malachia Hanna on November 25, 1939 in Lake City, South Carolina.&#8239; He was preceded in death by his parents, his sisters... View Obituary & Service Information

The family of Mr. John S Hanna Sr. created this Life Tributes page to make it easy to share your memories.

Send flowers to the Hanna family.