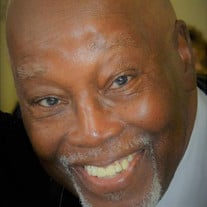 Johnnie (John) Milligan, Sr., the son of the late Frank and Laura Bell Wright Milligan was born in Tampa, Florida. on April 25, 1945. He was raised by his grandparents, the late Simmie Shafter and Melvina Leverette Wright in New Orleans, Louisiana. John calmly answered the Master’s call from labor to reward on Thursday November 04, 2021 at Trellis Supportive Care in Winston-Salem, North Carolina. ​John graduated from George Washington Carver High School in the New Orleans School System. Upon graduation, he had a desire to explore the country. Traveling was indeed his passion. Mixing and mingling with a diverse group of people is how he learned to adapt in varied cultures. ​John often shared his life experiences growing up in New Orleans as an only child receiving an abundance of love from all familial directions. Every so often, he would drift back and reminisce on his days in Bridgeport, Connecticut and Detroit, Michigan. ​John surely had a plan but he had no idea that his steps were ordered by the Lord. His call to service began early in his career. Upon his arrival to Winston-Salem in 1968, God began to do a work within him. John obtained employment at the Kate B. Reynolds Hospital where he advanced from central supply to the mental health unit. John became a diligent care provider. He dedicated himself to the medical field. John chose to further his education at Forsyth Technical Community College where he earned his credentials by the state of NC as a Emergency Medical Technician. In 1975, he accepted an opportunity to become a member of the Forsyth County Emergency Services team. His assigned ambulance (#23) answered many life-saving calls throughout the county until he retired in good standing in 1995. ​After his retirement, his life passion began to press against his heart. He had a strong desire to network and continue to serve in some capacity. He started LaBell’s Janitorial Services and became an entrepreneur. In 1997, John re-entered the workforce and accepted a position as a Lead Custodian for the Winston-Salem Forsyth County Schools. He found this opportunity to be one of his most rewarding. God allowed him to make many spiritual connections along the way. He retired from the WSFCS in 2007. ​Proverbs 18:22– He who finds a wife finds what is good and receive favor from the Lord. John affirmed, “God led me to her.” And on April 10, 1986, John united in holy matrimony with Beverly Bailey Milligan. An everlasting love… 35 years strong. ​John was baptized at New Birth Missionary Baptist Church in New Orleans at a very young age. In 1992, he received Christ in his heart. Under the leadership of great men and women of Christ, he worked diligently for the Lord. He served as a trustee in the church and a deacon of the church before answering his call to deliver God’s word to the multitude in 1997. He never took his eyes off God. In 1999, John and Beverly birthed House of a Delivered Praise, Inc. He became an ordained minister in 2001. ​Through John’s Christlike attributes, our family adopted new values for one another. He taught us that family is not always attached to birth rights. “Family” are those people that you connect with along your journey that accept you without judgment and love you unconditionally for a lifetime of forever. John blended a beautiful family. ​John leaves to cherish his loving memories to his wife, Beverly Milligan of the home; two sons, John Milligan, Jr. of Atlanta, Ga. and Michael Bailey, Sr. (Latrese Woodberry); three daughters, Tanisha Bailey (Rayvon Cox, Jr.), Nakiya White (Joel White) of Whitsett, N.C. and Sharonda Wright of Dallas, Texas; six grandchildren, Rakis Bailey (Yazmin Bailey), Tahja Bailey, Nygeil Nelson, Kenneth Thompson, Jr., Alexis Thompson, and Michael Bailey, Jr.; two great grandchildren, Kamar Bailey and Reyes Bailey.​ John was a loving and supportive father figure and mentor (Michael Thomas and Mizell J. Hall). He was a dedicated and compassionate Brother-in-Christ, uncle, cousin, and friend to a great number of loyal individuals who remained by his side through his life span. Special thanks to Dr. Rush at Wake Forest Baptist Health, Mount Eagle Home Care, Amedysis Hospice (Shamonica Washington), Trellis Supportive Care, and Douthit Funeral Services. A public viewing will be held Wednesday, November 10, 2021 from 1pm until 5pm at Douthit's. Funeral services will be held Thursday, November 11, 2021 at 1pm from Galilee Missionary Baptist Church. The family will receive friends at 12:30pm. Arrangements are in the care of Douthit Funeral Services.

Johnnie (John) Milligan, Sr., the son of the late Frank and Laura Bell Wright Milligan was born in Tampa, Florida. on April 25, 1945. He was raised by his grandparents, the late Simmie Shafter and Melvina Leverette Wright in New Orleans, Louisiana.... View Obituary & Service Information

The family of Pastor John L Milligan created this Life Tributes page to make it easy to share your memories.

Johnnie (John) Milligan, Sr., the son of the late Frank and Laura...

Send flowers to the Milligan family.