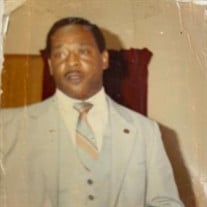 Rev. Joseph L. Nance, Sr 85, a loving husband, father, grandfather and friend departed his earthly life on July 5, 2021 at 05:15 a.m. in flight to his new heavenly home on the other shore at the calling of his Saviour, escorted by God’s precious angels with wings mounted up like eagles abound. “Jesus Air Flight 3913 Avera Ave” scheduled for arrival at the Promise Land. Rev. Joe as he was fondly called was born July 5, 1937 in Winston Salem NC to Boyise & Julia Nance. Rev. Nance attended the public schools in Winston Salem. He was a graduate of the U.S. Naval Academy, The Armed Forces Institute of Norfolk, VA and The Virginia Union Seminary. He attended Winston Salem Bible College, Post graduate studies at Southern Methodist University, PHD-Stanford University. He was a life-long member of the Emmanuel Baptist Church, before changing to the A.M.E Zion Church in 1975.In 1960 he was called to pastor the New Oak Grove Baptist Church. Old Town, NC 10 years. 1970 pastored the ST. Mark Baptist Church, WS NC 5years. 1975 he transferred to the A.M.E. Zion Church, Western North Carolina Conference and was appointed pastor of the Ezekiel A.M.E. Zion Church. Lexington N.C.5yrs. The Rickards Chapel AME Zion church Wilkesboro NC 3 years1983 John Wesley AME Zion Church Winston Salem NC 3yrs. 1985 The Rhoney’s Chapel AME Zion Newton NC 7 years. 1990 Mainville AME Zion Church. 1991 The Glenn’s Chapel AME Zion church East Bend, NC 9 years. 2000-2007 he returned to Ezekiel AME Zion Church. 2008-200 Denny Grove Wilkesboro NC. Rev Nance retired in 1988 from the R.J .Reynolds Research and Development Dept. after 23.8 years of service.1988-1998 he was a facility member of the North Carolina School of Arts. He received a commendation from Governor Jim Hunt from the State of North Carolina. He served on the board of Mayor Allen Joines. He served four years as the president of the local Chapter N.A.A.C.P. He also served for over 25 years as an associate Chaplain at Forsyth Memorial Hospital. Rev. Nance was a friend to anybody he met. His life-long friends were the homeless and the wine-o‘s of the Lexington, N.C Community. He was a nobody, telling everybody, about somebody who would help any body and his name was “JESUS”. If I can help somebody along the way, then my calling was not in vain. Thanks be to God who has given me the victory thru our lord and savior Jesus Christ. Rev. Nance was proceeded in death by his father, brother and two sisters and his loving mother Julia Nance Anderson who lived to be 105 years old. Rev. Nance is survived by his loving and supportive wife Brenda Nance, three daughters Camille Nance, Penny Thompson Melanie Nance. Two son Joe Nance Jr., and Collin Nance. Seven Grand Children and 4 Great Grand Children. Nieces, nephews adopted sister and adopted daughters and other relatives, good friends and neighbors. A public viewing will be held Friday, July 9, 2021 from 1pm until 5pm at Douthit's. Funeral services will be held Saturday, July 10, 2021 at 2pm from Greater ABBA Father's Ministries Inc, 4634 Shattalon Drive, Winston-Salem, NC 27106 . Family will receive friends at 1:30pm at the church. Arrangements are in the care of Douthit Funeral Service.

Rev. Joseph L. Nance, Sr 85, a loving husband, father, grandfather and friend departed his earthly life on July 5, 2021 at 05:15 a.m. in flight to his new heavenly home on the other shore at the calling of his Saviour, escorted by God&#8217;s... View Obituary & Service Information

The family of Rev. Joseph Nance Sr. created this Life Tributes page to make it easy to share your memories.

Send flowers to the Nance family.