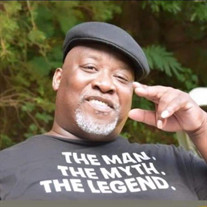 Mr. LaMont Denard Ruth, 51, came into this world bringing, Life, Love, and Light to those whom he knew. LaMont was returned to the Light from whence he came, on Friday, October 1, 2021. He was born February 4th, 1970, in Winston- Salem, NC and was a lifelong resident. LaMont was a serial entrepreneur and owned several businesses, including; Kingsway 360 as well as Truck Trucking LLC., with his business partners. LaMont graduated from Robert B. Glenn High School in 1988, and later went on to graduate in Auto Mechanics from Forsyth Technical School as well as gained a CDL from Trucking School. LaMont was always thinking outside of the box. He was spent a lot of time creating inventions, thinking of innovative plans and goals to enrich the community, as well as being extremely talented with his hands. He was a man of many talents. LaMont leaves to cherish his memories, his Mother, Carolyn Tuttle and his Father, Warnie Charles Hay Sr. (Gloria), both of Winston-Salem, NC. Two Daughters, Destiny Ivwurie (Ovigwe), and Carolyn Ruth. Six Sons, Justin Shelf (Tarribean), LaMont Ruth Jr., Brian Ruth, Devan Shelf, Jaiquan Ruth, and Raiquan Ruth; Three Sisters Alveta Samuels (Morlan), Marcella Hay, and Kisha Tuttle; One Sister/Cousin Annette Hardy (Donald); One Brother, Warnie Charles Hay (Ebony); A Host of Grand Kids, Aunts, Uncles, Nieces, Nephews, Cousins, and Friends. He is also survived by a lifelong friend Maxine Shelf; Best Friends, Richard and William Hayne, Rick Rowell, Clyron Thompson, and Taryton Thacker. LaMont also leaves to cherish his memory, a Fiancée, Cassandra Tate, whom he affectionately referred to as “His Queen”. He was preceded in death by his Maternal Grandparents William & Mae Etta Ruth, his Paternal Grandparents Paul & Louvenia Hay; his Brother Paul Hay Sr., and his Aunt Berna Jean Ruth. Remember me when I am gone away, Gone far away into the silent land; When you can no longer hold me by the hand. A public viewing will beheld Wednesday, October 6, 2021 from 1pm until 5pm at Douthit's. Funeral services will be conducted Thursday, October 7, 2021 at 11:30 am from Agape Faith Church . The family will receive friends 11:00 am at the Church. Arrangements are in the care of Douthit Funeral Services.

Mr. LaMont Denard Ruth, 51, came into this world bringing, Life, Love, and Light to those whom he knew. LaMont was returned to the Light from whence he came, on Friday, October 1, 2021. He was born February 4th, 1970, in Winston- Salem,... View Obituary & Service Information

The family of Mr. Lamont Denard Ruth created this Life Tributes page to make it easy to share your memories.

Send flowers to the Ruth family.