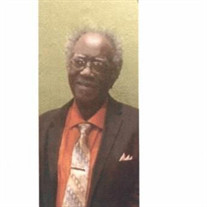 Larry Joe “Duck” Cunningham was born January 31, 1945, in Anderson County, Belton, SC to James Henry and Lottie McGee Cunningham. The family moved to Winston-Salem, NC when he was a baby. He was educated in the Winston-Salem Forsyth County Schools and graduated from Anderson High School. Later he attended Forsyth Technical Community College for Graphic Arts. He entered the Army on May 8, 1964, where he was a decorated Sharpshooter (Rifle), and Marksman (M-79) and received an ACM in Berlin. When he left the military, he came back to Winston-Salem and settled down. Larry was the third of four children - a brother Harry D. McGee, two sisters Betty C. Sligh and Darlene L. Kinchen. He was baptized at the age of 10 at Zion Memorial Baptist Church. In his later years he joined John Wesley AME Zion church where he worked as a faithful usher. He continued as a faithful usher and member of the Sunday School during his membership at Trinity Chapel Church. Larry knew the Lord, but then one day he walked through the doors of Hope Community Church and in his own words “something happened”. His whole life changed. He came into a deeper, more intimate knowledge of, relationship with, and love for the Lord. A fresh flame was ignited in him where he passionately pursued Jesus, the lover of his soul. In the past three years he started on a new journey of evangelism. Whether in the hospital, doctor’s office, or other medical facilities, Larry was busy asking staff if or where they attended church and inviting them to visit Hope. He loved his family, his Bishop, his Hope family, and most of all his Lord! Larry’s continual confession was “the Body and Blood of Jesus KEEPS me well, KEEPS my family well”. He BELIEVED. Larry had Faith for living and Faith for leaving. Monday, December 6th he decided that he was ready to go Home to be with Jesus, and Wednesday, December 8th at 12:21 PM he saw the Face of His Savior. He was preceded in death by his parents and his oldest brother Harry. Left to cherish his memories and love are both sisters; five daughters – Karen P. Taylor (Fred), Angela L. Cunningham, Tammy L. Gilkey (Yussef), Kimberly N. Cunningham, and Larria J. Cunningham; eight grandchildren – Marquita J. White, Jacquelyn P. White, Jonathan D. Cunningham, Ralph White III, DéQuan M. Cunningham (Tori), Shannaya L. Davis, Shannan T. Davis, and De’ja N. Cunningham; special devoted nieces and nephews – Michael M. Kinchen, and April D., Sean A., Sean A. Jr., and Seanna M. Stanback; an aunt, Ida M. Cunningham; and a host of other relatives and friends. Funeral services will be Friday, December 17, 2021 at 1pm Hope Community Church. Family will be receives at 12pm. A public viewing will be Thursday, December 16, 2021 from 1pm until 5pm at Douthit's. Arrangements are in the care of Douthit Funeral Services.

Larry Joe &#8220;Duck&#8221; Cunningham was born January 31, 1945, in Anderson County, Belton, SC to James Henry and Lottie McGee Cunningham. The family moved to Winston-Salem, NC when he was a baby. He was educated in the Winston-Salem Forsyth... View Obituary & Service Information

The family of Mr. Larry Joe Cunningham created this Life Tributes page to make it easy to share your memories.

Send flowers to the Cunningham family.