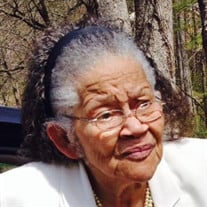 Laura Beatrice Scales, 89, took flight to her heavenly home on September 3, 2021 surrounded by family and friends. She was known to many as “Bea” She was born in Stokes County on March 30, 1932, to the late Laura Sue and Charlie W. Scales. She moved to Winston Salem at an early age and received her education in the Winston-Salem, Forsyth County school system. Bea was a devoted member of White Rock Baptist Church for over 50 years where she served on several Auxiliaries. She was also an avid helper and supporter to those in the Church and community. Bea truly knew Jesus as her Savior and Lord. She understood that the best timing for anything was the Lord’s timing. She will be remembered for her devotion and resilience in difficult times of life. Bea was a loving mother of four children Johnnie, Michael, Andrea, and Reginald, she was preceded by: Johnnie and Michael Scales. She is survived by Reginald Scales, Andrea and (James) Rowdy, and her adopted son Melvin Jones (Chris), her 18 grandchildren: Danielle (David), Channell, Tomasha, Michelle, Ashley, Laura, Andrea, Chances (Travis), Kenneth (DeeDe), James III (Dequeasha), Shawna, Jamel, Reggie, Aaron, Desmond (Tee Tee), Shelley (Leonard), Romeka, and Cassandra; numerous great-grandchildren and great-great-grandchildren who are left to carry on her legacy. She will also be missed by her sisters-in-laws Imogene Scales of Washington, D.C., and Sylvia Scales of Stockton, California. Nieces: Doris, Carolyn, Charlotte, Veronica, and Linda, her devoted cousins John Robert Scales, Mary and Shirley Jones, friends Loletta Williams, Sandra Williams, and her loving caregiver Wanda Holmes. Funeral services will be conducted Saturday, September 11, 2021 at 11:30am from Genesis Victory Outreach Center, 1882 Old Hollow Road, Walkertown, NC. The family will receive friends at 11:00 am at the church. Interment will follow in Piedmont Memorial Gardens at 3663 Piedmont Memorial Dr, Winston-Salem, NC 27107. Memorial donations and gifts may be sent to: Andrea S Rowdy c/o : Douthit Funeral Services, 515 Specialty Park Drive, Winston-Salem, NC. Arrangements are in the care of Douthit Funeral Services.

The family of Mrs. Laura Scales created this Life Tributes page to make it easy to share your memories.

Laura Beatrice Scales, 89, took flight to her heavenly home on...

Send flowers to the Scales family.