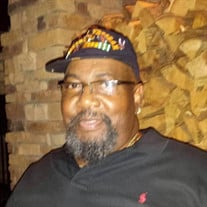 Marion Otto Sewell, Jr. 72 of Winston-Salem North Carolina entered eternal peace on July 27, 2020, at his home with his beloved wife by his side. Affectionally known as “Pete” he was born July 7, 1948 in Winston-Salem NC to the late Marion Otto and Flossie Sewell. A product of Skyland Elementary School and Simon G. Atkins High School where he started playing football in 1962-1963 Pete was on the last freshman team to play at Atkins. He played offensive end on the varsity football team 1963-1964, Defensive and offensive tackles 1964-1965, All-City football team and played in the Shrine Bowl 1965-1966 with such high achievements he was inducted into the 7th Annual Sportsman Hall of Fame in 2012. After graduating he joined the United States Marine Corps serving in the Vietnam War 1966-1969. He received the rank of Sergeant with several commendations: National Defense Service Medal, Vietnamese Service Medal, Vietnamese Campaign Medal, Purple Heart Medal, Combat Action Ribbon, and two Good Conduct Medals. Upon his return home he gave thirty-one and a half years of service with RJR Tobacco Company before retiring. Member of The Most Worshipful Prince Hall Grand Lodge of North Carolina and Jurisdiction Olympic Lodge #795. And a dedicated member of Life Changing Transformation Church Ministries where he served in the official capacity as Trustee. He is preceded in death by his beloved parents, and a sister Mary E. Sewell. He leaves loving memories to be cherished by Mrs. Avis Miller Sewell his loving wife of 40 years. Four children Vevica Sewell, Christopher Sewell (Annette), Rodney Purvis (Tremona) and Natasha Epps. Two sisters Marva Sewell, Marilyn S. Elmore (Thom) and a brother Rev. Mitchell Sewell. Six grandchildren, Andrew Sewell (Jasmine), Alex Sewell, Rodney Purvis Jr. Mykiya Smith and Semaj Reid. Two Aunts Mrs. Magnolia Key and Mrs. Katie Wilson, several nieces, nephews, cousins, and many friends. Pete was tall in stature but was a gentle giant with an unwavering faith in God. One with a deep passion for quartet music, fishing, his Carolina Panthers, and family gatherings. His family and friends could always count on him in time of need. A kind and caring person with a lively sense of humor, an extraordinarily strong personality, one that did not hesitate to speak his mind and give quite a few antics along with it when necessary. He lived his life to the fullest and loved to share his life stories with everyone that he met. A person whose company everyone enjoyed and will miss very much. When sickness began to take over his body, he would engage himself in intense conversations with anyone sharing how he trust God with his life. His life spoke for itself; it seems too short to many but those who were touched by him understand that the quality of existence far exceeds the quantity of time in which one lives. When he was running out of patience due to the extreme pain he endured he trust God’s timing. Throughout his sickness he gave us such courage and hope and reminded us all about the preciousness of life. Though some here today do not like the outcome Pete put all his trust in God’s decision and went home to a brand-new life. A public viewing will be held today from 2pm until 5pm at Douthit's. A private service will be held Friday, July 31, 2020 and interment will follow in Piedmont Memorial Gardens.

The family of Mr. Marion Pete Sewell created this Life Tributes page to make it easy to share your memories.

Send flowers to the Sewell family.