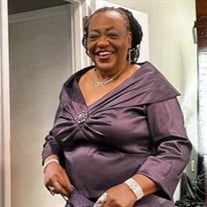 Mattie G. Fowler, 81, affectionately known as “Nana” entered into the full presence of the Lord on April 20, 2022. Mattie was born in Rural Hall, NC on April 1, 1941, to the late William Goode Sr and Daisy Mae Irving Goode. Mattie graduated from Carver High School in 1958. After graduation, she moved to Columbus, OH in pursuit of career opportunities. After a brief stay, she returned to North Carolina where she found work at RJ Reynolds Tobacco Company. Mattie worked at RJ Reynolds for 33 years until her retirement in 1997. Throughout her time at Reynolds, Mattie was an avid baker who won numerous 1stplace prize awards at the Dixie Classic Fair. She would go on to start her own baking business. Ultimately, partnering and assisting her daughter (Pamela) at 3 Layers Cakery in Downtown Winston-Salem. Mattie came to know Jesus Christ as her personal Lord and Savior in December 1994 while attending Evangel Fellowship in Greensboro, NC. She was a faithful member of Evangel from 1994 to 2010. In 2010, Mattie moved to South Hill, VA and found a church home at Glory 2 Glory Ministries where she served faithfully from 2010 to 2015 until her move back to North Carolina. From 1994 to the date of her transition, Mattie was known by many to be a faithful Bible toting, scripture quoting, praying, giving and loving servant of the Lord Jesus Christ. Mattie’s final church home would be Fairfield Baptist Church, Mocksville, NC where she served as a Deaconess. Mattie was the wife of Harvey (Lee) Fowler; beloved mother to seven children, three whom preceded her in death; Gary O. Mitchell, Karen M. Frazier and Darryl E. Mitchell. She is survived by her remaining four children, Pamela (Montinique) Cager, Timothy (Katrina) Mitchell, Tonya (Victor) Lambert and Terence (Shenedia) Mitchell. Mattie was also the beloved sister of six siblings, two whom preceded her in death; Frank Henry and Rosa Mae Peppers; four remaining siblings; Theodore (Betty) Goode, Sarah Robinson, William (Theresa) Goode, Jr, and Edward (Clara) Goode. A Nana to 14 grandchildren and G-Nana to 10 great grandchildren and a sweet and loving Aunt to a host of nieces and nephews. Her presence will be dearly missed by all. A public viewing will be held Sunday April 24, 2022, from 1pm until 5pm at Douthit's. Funeral services will be held Monday April 25, 2022 at 12pm from New Hope Baptist Chruch and interment will follow in Piedmont Memorial Gardens. The family will receive friends at 11:30am. Arrangements are in the care of Douthit Funeral Services.

The family of Mrs. Mattie Fowler created this Life Tributes page to make it easy to share your memories.

Send flowers to the Fowler family.