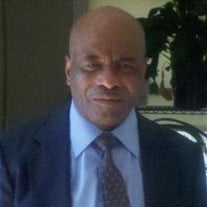 Mr. McConnell Lee Coleman, Sr., 81, passed away on Wednesday, February 12, 2020 at Novant Medical Center after an extended period of illness. Mr. Coleman was a native of Fairfield County, S.C. He was born on January 25, 1939 to the late John... View Obituary & Service Information

The family of Mr. McConnell Lee Coleman Sr. created this Life Tributes page to make it easy to share your memories.

Send flowers to the Coleman family.