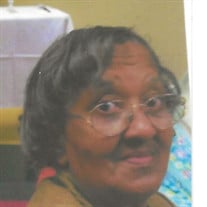 Minnie Ruth Glenn , 88 Years old of Winston Salem, N.C. transitioned to eternal life on Saturday, June 13,2020. She was born on October 31, 1931 to the late Charlie W. and Ida L. Glenn in Pfafftown, N.C. She was preceded in death by her three... View Obituary & Service Information

The family of Ms. Minnie Ruth Glenn created this Life Tributes page to make it easy to share your memories.

Send flowers to the Glenn family.