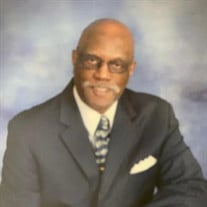 Olin Odell Owens, age 90 departed this life on Thursday, February 10th, 2022. He was born in Lexington, NC to Juliana Owens on August 31, 1931, and raised by his grandparents John Curtis and Lillie Payne Owens. He was educated at Dunbar High School in Lexington where he played on the football team. Olin was a great swimmer and an avid golf player winning several trophies for his competitiveness over the years and participated in several golf leagues, tournaments and with his numerous golf buddies. Olin married shortly after high school to the late Marion Jean Hawkins Owens. Olin was a man’s man in that he was dependable, hardworking, a gentle but very firm and straight forward His work history started out in the furniture industry with Dixie and United, later on the transitioned to the trucking industry where he was employed with Mclean Trucking. This employment moved him to Nashville, TN until the business closed and he then relocated to Memphis, TN and gain employment with other trucking companies; he drove trucks for over 40 years. He was Scout Master in Lexington, NC with Troup 210. In 1959 Olin and his wife Marion were involved in a train accident in Winston-Salem, NC which threaten to take their lives, Olin was resuscitated three times and medics had given up on him but God had a purpose on his life and after one more try he was revived. Following the accident Olin and his family became members of Ephesus SDA Church in Winston-Salem, NC and served faithfully until his health failed. Olin was preceded in death by his mother, grandparents, daughter (Janet), siblings James R. Holt, Charles Holt, Georgianna Hearts, cousin Roy Owens and a devoted uncle Shelly T. Owens. He will always be remembered for his quiet, gentle but firm demeanor, kindness and his love of God. Left to cherish fond and loving memories are his son/caregiver Phillip O. Owens (Barbara), son Steve Owens (Lynn), daughter Gloria A. Owens, several grandchildren, great grandchildren, nieces, nephews and friends. A public viewing will be held Wednesday February 23, 2022, from 1pm until 5pm at Douthit's'. A funeral service will be held Thursday February 24, 2022, at 12pm from Ephesus Seventh Day Adventist and interment will follow in Evergreen Cemetery. The family will receive friends at 11:30 am .Arrangements are in the care of Douthit Funeral Services.

Olin Odell Owens, age 90 departed this life on Thursday, February 10th, 2022. He was born in Lexington, NC to Juliana Owens on August 31, 1931, and raised by his grandparents John Curtis and Lillie Payne Owens. He was educated at Dunbar High... View Obituary & Service Information

The family of Mr. Olin Owens created this Life Tributes page to make it easy to share your memories.

Send flowers to the Owens family.