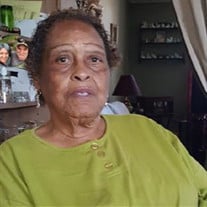 .Mrs. Priscilla Ann Joyce Searcy, 78 of Winston-Salem was called to her heavenly home December 14, 2020 at Wake Forest Baptist Hospital. Priscilla Joyce Searcy was born April 20, 1942 in Patrick County, Virginia to the late Willie and Estella Joyce. She was preceded in death by one brother James Palmer and one sister Jessie Mae Tatum. She was preceded by her parent Willie Estella Joyce. She grew up in Winston-Salem, North Carolina. She leaves behind a loving lifelong partner Jessie Nelson. She was a mother to many although she never had any children of her own. Priscilla was a loving person. She was always kind to people especially the neighbors. She was also quite giving, anything you asked for and she had it, it was given. Anyone who passed by as she was sitting on the porch (as she always was) there was always a nice greeting. Priscilla was also a fabulous dresser. She always dressed for the part everywhere she went. She is survived by a loving life long companion Jessie Nelson and his daughter Jessica Byrd of 33 years, a good friend L.C. Kelley; two sisters Mrs. Geraldine Joyce Fansler of Westfield, NC, Miss Bernice Joyce of Claudville, VA, one brother Walter, Jr. Joyce of Lawsonville, NC, along with a host of nieces, nephews, family and friends to name a few but no limit too, The Carter’s, Betty Helen, Dianne, Tony, Donald/ Jolyn, Blue, “Rainbow”, Squeeky and Rathel, Jr., Aunt Glenn, Aunt Nancy, Sharikka Ford (Rikka), Antoinette Ford, Farris Ford, Alexander Ford, Calvin Moore, Vera Moore, Kimberly Moore, Frank Huntly, Julius, June, Angelica Massey and many more. A public viewing will be held Friday, December 18, 2020 from 1pm until 5pm at Douthit's. A private services will be held on Saturday, December 19, 2020. Arrangements are in the care of Douthit Funeral Services.

The family of Ms. Priscilla Ann Joyce Searcy created this Life Tributes page to make it easy to share your memories.

.Mrs. Priscilla Ann Joyce Searcy, 78 of Winston-Salem was called
to...

Send flowers to the Searcy family.