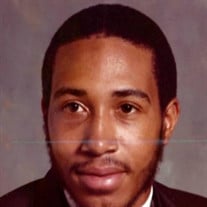 Mr. Richard Donald Roane Jr. at the age of 55 departed this earthly realm and answered God’s call to enter into eternal rest on Thursday, March 10, 2022. God sent His angel to Moses Cone Hospital in Greensboro, NC, where Richard was a patient, to bring the soul of His child home. Richard was born May 2, 1966, in Winston-Salem, NC to Deacon Richard and Jacqueline Roane Sr. “Junie”, as he was affectionately known to family and friends, was a 1984 graduate of East Forsyth High School. He enlisted in the United States Army in May 1987 and completed his tour of duty in September 1992. He attended Zion Memorial Baptist Church and participated in many church activities with his family. Richard never met a stranger. He was a sports fan who enjoyed watching Dallas Cowboy football and Carolina Tar Heel basketball. Those cherishing loving memories of him are his children, Richard III “Trey” of Atlanta, GA, Jacquelyn Al'lyse of Denver, NC, Rannia of Greensboro, NC, Kevin Pearson of Winston-Salem, NC; his parents of Walkertown, NC; one sister, Deborah D. Roane of Walkertown, NC; one brother, Robert L. (Donna) Roane Sr. of Winston-Salem, NC; two nephews, Robert L. Roane Jr. of Washington, DC and Blake Coleman of Winston-Salem, NC; one niece, Deshjna Brown of Winston-Salem, NC; one great nephew, Da'Siah Levon“Si” Brown of Winston-Salem, NC; a host of aunts and cousins; and many close friends. A public viewing will be held Thursday March 17, 2022, from 1pm until 5pm at Douthit's. Funeral services will be held Friday March 18, 2022, at 1pm from Zion Memorial Baptist Church and interment will be held Monday March 21, 2022 at 9am in Salisbury National Cemetery. The family will receive friends at 12pm at the church. Arrangements are in the care of Douthit Funeral Services.

Mr. Richard Donald Roane Jr. at the age of 55 departed this earthly realm and answered God&#8217;s call to enter into eternal rest on Thursday, March 10, 2022. God sent His angel to Moses Cone Hospital in Greensboro, NC, where Richard was a... View Obituary & Service Information

The family of Mr. Richard Roane Jr created this Life Tributes page to make it easy to share your memories.

Mr. Richard Donald Roane Jr. at the age of 55 departed this earthly...

Send flowers to the Roane family.