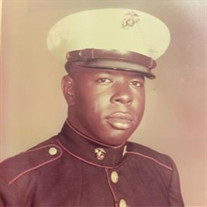 Mr. Richard D. Simmons of 1117 Louise Rd. was born on December 26, 1946, in Winston -Salem, NC, to Henrietta Simmons and Toy Dubois. He departed this life unexpectedly on January 25, 2021 at Forsyth Medical Hospital. Richard’s Christian walk humbly began at St. Paul United Methodist Church. He would later transition his membership to Christ Temple Church of God in Christ, in Mocksville NC, where he faithfully served as a Deacon. Richard was educated in the Winston Salem Forsyth County School System, and after graduating from Anderson, he enlisted in the Marines, where he would go on to serve 16 years. He was employed with Milpak Graphics for several years. He was preceded in death by his parents, and a brother, Sonny Harris. Richard had a quiet but strong presence; a great sense of humor and he was a man of commitment and passion. He was not a man that spoke many words, but when he did, he said exactly what was on his mind. Richard loved the simple things in life, like spending time with family and friends. His life will forever be cherished in the lives of his wife, Ms. Sabrena Johnson, stepson, Joseph Johnson and stepdaughter, Lillian Johnson. His brother, Calvin Simmons, devoted nephews Brian and Devon Simmons. Special friends, Johnny Ragsdale, Susan and family, and a host of nieces, nephews and other devoted family and friends. Richard will be greatly missed by his loving family and always remembered in their hearts. A public viewing will be held Tuesday, February 2, 2021 from 1pm until 5pm at Douthit's. A private funeral will be held Wednesday, February 3, 2021 and interment will follow in Salisbury Nation Cemetery. Arrangements are in the care of Douthit Funeral Services.

The family of Mr. Richard D Simmons created this Life Tributes page to make it easy to share your memories.

Send flowers to the Simmons family.