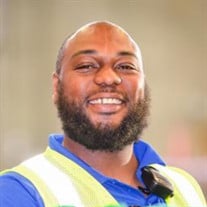 Robert Steven Carpenter, born in Forsyth County on September 29, 1984, to Jonathan and Jacqueline Carpenter Brannon. He departed this earth on December 4, 2021. Robert was educated in the Winston-Salem Forsyth County School System where he graduated from Carver High School in May 2002. Robert enjoyed playing football and baseball. He played football with the Winston-Salem Indians and the Pfafftown Packers throughout his childhood and baseball with Twin City Little league, where her finished his passion for baseball and football at Carver High School. After high school Robert obtained his associate degree in Applied Science Automotive Systems Technology at Forsyth Technical Community College in Winston-Salem, NC. Robert went on to be employed by Pepsi Bottling Services where he remained gainfully employed until his passing. Robert started as a forklift driver in August 2013 and through his drive and outstanding work ethic he worked his way to Supervisor for the last five years. Robert’s warm heart, infectious spirit, and cheerful smile could brighten up anyone’s day. Robert enjoyed riding his motorcycle in his free time and spending time with his family and friends. To know Robert was to know that he was “Mr. Fix It.” Robert was very skill-full with his hands and enjoyed working on cars. He enjoyed spending time with his father on the weekends up under the hood tackling and jobs he had taken on. When he was not working on a car, he would be in attendance to any car show or drag racing event that was going on. Robert was a real old school car enthusiast as he was currently rebuilding his 1971 Monte Carlo. Robert was proceeded in death by his grandmother Josephine Loretta Penn Carpenter, grandfather and grandmother Dr. Rev. William and Martha Brannon, and his aunt Atonia Carpenter. Robert leaves to cherish his memories and carry on his legacy his wife Misty Carpenter and his daughters Kimora Carpenter and Madysen Grooms-Owens. A sister Lekei Westmoreland (Jake) of Winston-Salem. His mother-in-law Tonya Owens, sister-in-law Brittany Owens, and father-in-law Michael Owens. His loving grandfather Prewlow Carpenter Sr. (Marie). His great-uncle Joe Penn of Winston-Salem. His aunts Charlene Carpenter and Gayle Elizabeth Brannon and an uncle Prewlow Carpenter Jr. (Althea). His cousins Erika Carpenter, Charleston Eugene Leak (Tiffany), Martha Willette Brannon, Timothy Earl Brannon, and William Carter; and a host of nieces, nephews, family, and friends. Special recognition to his road dawg Antonio “Boogie” Johnson for always being there for Robert when he needed. A public viewing will be held Friday, December 10, 2021 from 1pm until 5pm at Douthit's. Funeral services will be held Saturday, December 11, 2021 at 10:00 in the chapel of Douthit's. Arrangements are in the care of Douthit Funeral Services.

Robert Steven Carpenter, born in Forsyth County on September 29, 1984, to Jonathan and Jacqueline Carpenter Brannon. He departed this earth on December 4, 2021. Robert was educated in the Winston-Salem Forsyth County School System where he graduated... View Obituary & Service Information

The family of Mr. Robert Steven Carpenter created this Life Tributes page to make it easy to share your memories.

Send flowers to the Carpenter family.