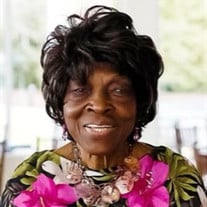 Ruby Veronica Rodney was born February 8, 1933 to Virginia Palmer Rodney and Charles Benjamin Rodney in Beterverwagting, Guyana. She was the youngest of nine children. From an early age, Ruby earned areputation which would define her character: an unquenchable curiosity for learning about and engaging with the world around her as well as a talent for peacemaking, reliably defusing any overly spirited family discussion with her gentle manner. After completing secondary education, she embarked on a path of educators forged by her older brother and cousins, enrolling in the Guyana Teachers Training College as preparation for primary school teaching. After a brief stint at her home primary school, she developed an interest in teacher development and left to further her studies at University College of the West Indies in Jamaica. She completed a Bachelor’s degree in English in 1962; a year later, she received her Diploma in English Teaching. Ruby returned to Guyana, joining the faculty of her alma mater Teachers College, with a renewed focus on training of teachers of English in Secondary schools. She strengthened her teaching credentials spending stints studying in Scotland and England. Ruby emigrated to the United States in 1973 and became a Research Associate at Rutgers University in New Brunswick, NJ; and in 1979, she graduated with a doctoral degree in English Education. During the same year, she joined the faculty of Winston-Salem State University moving from junior rank to Professor of English, retiring in 2008. Ruby continued to be an inspiring teacher both inside and outside the classroom. Aunt Faye, as she was affectionately known to her family, was always readyto offer a kind word of encouragement and support to anyone she encountered. She would regularly mail bundles of books and other early-reading materials to her young nieces, nephews, and children of friends; Ruby believed reading was the best preparation for life. One of Ruby’s cherished pastimes was gardening. She helped to maintain her community garden, winning various gardening competitions with her expert green thumb. Ruby loved sharing her prized flowers with dear friends and routinely beautified many different places with her horticulture - including hospital rooms, university settings and church grounds. In her early years, Ruby pursued spiritual upliftment at St. Mary-Ye-Virgin Anglican church. Later she became a faithful member of the St. Philips Moravian Church in Winston-Salem, North Carolina. She was known for her generous spirit and her expressions of love and affection to all who crossed her path. She will surely carry her passion for spirituality, education, philanthropy and horticulture when she sits with the saints in Heaven. She was preceded in death by her husband, Sam Huntley, brothers – Henry, Wilfred and Clement Rodney and sisters – Hermine Waldron, Mary Kidd, Pearl Phillips, and Susan (Leo) Kennedy. She leaves to cherish her memory, a sister, Margaret Hyderkhan; and many loving nieces, great-nieces, nephews, great-nephews, cousins and friends. Aunt Faye will be dearly missed. A public viewing will be held Wednesday, August 26, 2021 1pm until 5pm at Douthit's. Funeral services will be held Saturday, August 28, 2021 at 4pm from Guarino Funeral Home, 9222 Flatlands Avenue, Brooklyn, New York. In lieu of flowers donations can be made to St. Phillip's Moravian Church, 501 S Main Street, Winston-Salem, NC 27101 Arrangements are in the care of Douthit Funeral Services.

Ruby Veronica Rodney was born February 8, 1933 to Virginia Palmer Rodney and Charles Benjamin Rodney in Beterverwagting, Guyana. She was the youngest of nine children. From an early age, Ruby earned areputation which would define her character:... View Obituary & Service Information

The family of Dr. Ruby Veronica Rodney created this Life Tributes page to make it easy to share your memories.

Send flowers to the Rodney family.