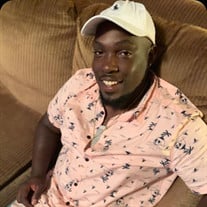 Mr. Ryan Keith Wright, 30, passed away Saturday, March 21, 2020 in Arkansas. Ryan was born on March 10 1990 in Augusta Ga. To Paula wright Blue and Dr. Brian Schaeffer. He was married to Tamiase S. Bozeman Wright. Out of their union they created two beautiful daughters Tami' Ryana Wright and Brianna Wright. Ryan attended Mount Tabor High School in Winston Salem NC. He had a passion for music and was very talented when it came to fixing anything. Ryan worked at McDonald's as Manager Winston Salem NC until he relocated with his family to Blytheville Arkansas. He soon was employed with the city of Blytheville waterworks, he recently took a state test to advance within the company. He loved his family but cared more for the family he created, he love spending time on outings with his family in his spare time, he loved dancing with his daughters and singing to his wife. Ryan was a very hard worker and provider for his family, he was a loving son, father, brother, nephew, uncle and cousin but most important husband. He will be missed by many. He leaves to cherish his precious memories with his wife, Mrs Tamiase Wright and his daughters, Tami' Ryana and Bri'Yana Wright; his Mom ( Paula Wright Blue) his Father and his wife,(Dr. Brian K. Schaeffer, Pastor of Interceding Christian Center (ICC) in West Memphis, AR. (1st Lady Tina Schaeffer.) His Mother in Law, Ms. Tira Clark ( Mr Leroy Richardson) Brother in Law, Kahleel Bozeman(Thomasina); his brothers (Kedrick, Brandon, Deontay, Rashard and Tyler);his sisters (Diamond and Nautica Blue) his step sister ( Viola Schaeffer) his step brothers,(Michael P. Schaeffer) (Kendrick Harris and Kelvin Harris); Two nephews (J'von Albright and Ja'marion Blue) and host of Aunties and Uncles and friends. Ryan was preceded in death by his Grandmother (Emma Wright) and his Step Father (Hubert Blue) and Two great aunts. A public viewing will be held Friday, April 3, 2020 from 2pm-5pm at Douthit Funeral Services. Due to the current mandate regarding COVID-19, a private funeral is planned for immediate family.

Mr. Ryan Keith Wright, 30, passed away Saturday, March 21, 2020 in Arkansas. Ryan was born on March 10 1990 in Augusta Ga. To Paula wright Blue and Dr. Brian Schaeffer. He was married to Tamiase S. Bozeman Wright. Out of their union they created... View Obituary & Service Information

The family of Mr. Ryan Keith Wright created this Life Tributes page to make it easy to share your memories.

Send flowers to the Wright family.