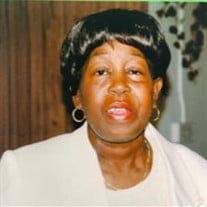 Saturday, January 30, 2021, heavenly trumpets played softly as God called one of his soldiers home. The soft rain changed to snow as the Gates of Heaven opened to invite her home. The wind softly whispered her name, Shirley Jean Robinson McMillan. She is the daughter of the late Roscoe Warren Robinson and Otella Bethune Robinson. Born on October 3, 1941 in Fayetteville, NC where she graduated from E.E. Smith High School. Shirley would graduate from Winston-Salem State University with a degree in Education. She taught third grade at Mocksville Elementary, in Davie County, for 34 years. Jean, as she was affectionately known, accepted Christ at an early age. She was an active and devoted member of Red Bank Baptist Church until her health began to fail. She loved God, her family, and her church dearly. A dependable servant of God, she was always willing to help in any capacity. We as Christians are not without hope and know, Jean will always be with us. Jean would marry Robert Welton McMillan and they would raise their three boys to men. She was preceded in death by her parents and six brothers Nathaniel Robinson, Roscoe Robinson, Jimmy Robinson, Thomas Robinson, Henry Robinson and one sister Henrietta Horton and one son Anthony Keith McMillan. Left to cherish fond memories of Shirley Jean Robinson McMillan are her sons, R Fitzgerald McMillan (Stacie), Reginald McMillan (Elizabeth Johnson); a loving sister, Gloria Cunningham; ten grandchildren, Dillon McDowell, Jalen Swepson, Robert McDowell, Tahan, Mikayla McMillan, Reginald McMillan, Cameren McMillan, Braylen McMillan, Londyn McMillan, and Roman McMillan. A daughter in law, Alisha McMillan. A very devoted and dear friend Renee Minor. A public viewing will be held Thursday, February 4, 2021 from 1pm until 5pm at Douthit's. A private funeral will be held Friday, February 5, 2021 and interment will follow in Red Bank Baptist Church Cemetery. Arrangements are in the care of Douthit Funeral Services.

The family of Mrs. Shirley McMillan created this Life Tributes page to make it easy to share your memories.

Send flowers to the McMillan family.