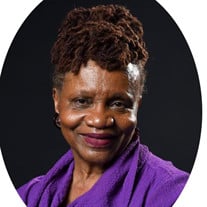 “Weep not, weep not, She is not dead; She’s resting in the bosom of Jesus/Grief-stricken brother, Arthur—weep no more;/Left lonesome nieces and nephews, other relatives and friends—weep no more./She’s only just gone home.” (Paraphrase version of “Go Down, Death,” a funeral sermon bynoted African American writer, James Weldon Johnson). Mrs. Sylvia Yvonne Sprinkle Hamlin, the daughter of the late Thelma Norwood Holtzclaw and Arthur Sprinkle, Sr. was born on April 25, 1945 in Forsyth County and departed this earthlylife on Monday, January 3, 2022 at Moses Cone Hospital in Greensboro, North Carolina. Upon graduating from Carver High School in 1963, she attended Winston-Salem State University where she received a B.S. degree in Education. After teaching in the public schools for a brief while, Sylvia furthered her education at Clark Atlanta University where she earned an M. S. degree in Library Science and later on, a Certificate of Advanced Study in Educational Administration at Cheyney State University in Pennsylvania. After working in the library system in Pennsylvania for a few years, Sylvia returned to her alma mater, Winston-Salem State University where she was employed in the C. G. O’Kelly Library. In 1979, she was hired as head of Children’s Outreach at the Forsyth County Central Public Library. It was there that she ultimately became the director of the entire Forsyth County Public Library system, the first female and the first African American to serve in that position. Under her leadership, new programs were established at all of the library branches, including advanced technology made available for the attendees, computer learning centers, bilingual story times, On the Same Poem community read, a Teen Central department, E-readers that were loaned to library customers, the opening of the new Central Library in 2017, the Paddison Memorial Kernersville Branch Library in 2018, and the groundbreaking for the new Clemmons Branch Library in 2018, and so much more. Along with her success as a library director came her professional involvement in organizations at the local level and beyond. Some of her accomplishments include being chair of the Roundtable for Ethnic Minority Concerns of the North Carolina Library Association, the Director of the North Carolina Library Association, Chair of the National Planning Conference for the Black Caucus of American Library Association, President of the Black Caucus of the American Library Association, the first African American member on the Board of Forsyth County Employees Credit Union, and more. Because of her substantial involvement in the library profession and the community, Sylvia was the recipient of several awards. Some of them include: Recipient of the Winston-Salem Chamber of Commerce Duke Energy Community Achievement Award, Honoree in the North Carolina Heritage Calendar by the Governor of North Carolina for her contributions to the African American Experience in North Carolina, Library Director of the Year Award by the North Carolina Public Library Directors Association, Recipient of the Arts Council of Winston-Salem/Forsyth County Volunteer of the Year Award, The Winston-Salem Chronicle Woman of the Year Award, and many more. At a young age, Sylvia joined Center Grove AME Zion Church in Tobaccoville. Later on, she became a member of St. Stephens Episcopal church where she served on the vestry and was a part of other ministries at the church as well. In the community, Sylvia was an active volunteer in several organizations. Just a few include being a member of the Shepherd Center of Greater Winston-Salem, the Women’s Fund, the Up-and-Coming Investment Club, President of Forsyth Early Childhood Partnership, and most importantly, president, Board of Directors of the North Carolina Black Repertory Company, and the executive producer of the National Black Theatre Festival, the largest event in the history of Black theatre in the world. She took on this monumental task after the death of her husband of twenty-five years, Larry Leon Hamlin, who preceded her in death in 2007. In essence, Sylvia Sprinkle Hamlin was indeed a phenomenal woman. She leaves behind to cherish her memories one brother, Arthur (Peculiar) Sprinkle; her stepson, Larente Hamlin; her grandsons Jaquan and Angel, nieces Beleita Taylor Lomax, Michelle Hines, Karen Norwood, Renee Owens, Tomika Sprinkle, April Sprinkle, Chantele Shear; nephews Rodney Mitchell, Antoine Norwood, Nathaniel Norwood, Jr., London Norwood, Brian Norwood, Timothy Norwood, O’Lando Speas, Arthur Conrad; mother-in-law, Annie Hamlin- Johnson; sisters-in-law Audrey Norwood, Mattie Norwood, Sherry Hamlin Robinson and Linda Hamlin; her godmother, Mrs. Mattie Glenn; and a host of other relatives and friends. In lieu of flowers the family request donations be made to the C. G. O’Kelly Friends of the Library Winston-Salem State University or the North Carolina Black Repertory Company (NCBRC) of Winston Salem, NC. “Weep not, weep not, she is resting in the bosom of Jesus. Funeral service will be held Wednesday, January 12, 2022, at 11:00am from Galilee Missionary Baptist Church and interment will follow in Piedmont Memorial Gardens. The family will receive friend Tuesday, January 11, 2022, from 6pm until 8pm at Galilee Missionary Baptist Church. At the request of the family there will be no public viewing. Arrangements are in the care of Douthit Funeral Services. galileembc.thechurchonline.com

The family of Mrs. Sylvia Sprinkle- Hamlin created this Life Tributes page to make it easy to share your memories.

“Weep not, weep not, She is not dead; She’s resting in the bosom...

Send flowers to the Hamlin family.