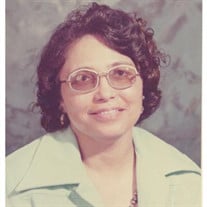 Thelma Jean McCoy Johnson was born on Tuesday, February 7th, 1933, in Winston-Salem, NC to John Lucius McCoy and Mary Tindal McCoy. She went to sleep in Jesus on Friday evening April 15, 2022. Thelma attended Atkins high school and later obtained her GED from Forsyth Technical Institute in 1973. She began the most important work of her life as a mother in 1950 when she gave birth to the first of her six children. However, even though the last of her biological children were born in 1959, she continually became a mother to many others throughout the entirety of her adult life, providing food, clothing, shelter, money, wisdom, and love without bias. Among the many gifts which Thelma possessed, two of the most notable were her lifelong caring, nurturing, and love of her children and grandchildren, and her passion for helping others. Thelma joined ESR (Experiment in Self-Reliance) in 1966 as a volunteer and later joined the staff as a full-time case worker for 32 years. Not only did she help hundreds of others navigate their way through life in their time of need through her work at ESR but she also, on her own time and with her meager resources, consistently sought to relieve the suffering of others whenever and however she could. She possessed a thorough knowledge of the US social help system and freely shared that information to help the poor obtain much-needed resources to improve the quality of their lives. In her earlier years, she attended Saint Paul Methodist Church and later joined Union Chapel Baptist Church where she served as a deaconess alongside her husband in ministry. After retiring, Thelma and Ben spent their time in church ministry, and as the quintessential grandparents affectionately known as Granny and Papa. Visiting, spending time with, and helping the grandkids were among their greatest joys! Thelma is preceded in death by her parents and three siblings, John Jr., Eulalia and Tim and the love of her life for 43 years, Benjamin Reid Johnson. Family members remaining to celebrate her life are her children; Ronald Little, Rosalyn Little, Ricky Little, Roy Little, James (Sabrina) Little, Jr., and Timothy Little; two stepsons, Benjamin, Jr. and Reginald Johnson; Grandchildren; Marche Byrd, Dominique Pugh, Moses Williams, Olivia Little, Danielle Little, Jon Little, Julian Little, Cameron Little and Jacey Johnson; Great Grands; Za'Rius Deazer, London Teasley, Michael Floyd Jr, Dakota Reid Correll and a host of nieces and nephews. Mama always made it a point to know her children’s friends. Two (in particular) that considered her their mama, are James Giles(deceased) and Herman Springs. A public viewing will be held Thursday April 21, 2021, from 1pm until 5pm at Douthit's. Funeral services will be held Friday April 22, 2022, at 12pm from Ephesus Seventh Day Adventist Church. The family will receive friends at 11:00am. Arrangements are in the care of Douthit Funeral Services.

The family of Mrs. Thelma M. Johnson created this Life Tributes page to make it easy to share your memories.

Send flowers to the Johnson family.