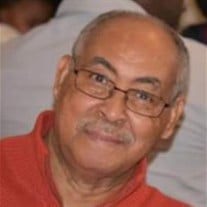 Deacon Tracy Donald Hairston, Sr. transitioned from labor to reward in the early hours of Tuesday, August 18, 2002. He was born September 12, 1947 in Axton, Virginia to Henry V. and Viola P. Hairston who preceded him in death. He was educated in the Henry County Virginia Public School System graduating from George Washington Carver High School Class of 1965. After graduation, he was employed by Hampton Industries where he worked faithfully to gain the position of Shipping Manager. He was employed by Hampton for approx. 32 years until its closure. He then was employed by Grass America, Inc., Kernersville, NC as Shipping/Receiving Manager and retired after 6 years. He accepted Jesus Christ as his personal Lord and Savior, baptized by Rev. Warnie C. Hay and joined Galilee Missionary Baptist Church in 1989. While at Galilee he faithfully fulfilled the duties of Trustee, Adult Men’s Sunday School Class Teacher, Bible Study Teacher and Deacon. After moving his membership to Greater Galilee Winston, he continued maturing his servanthood status by being a passionate Bible Teacher and mentoring to the adult men. He taught the word of God with clarity inspired by the Holy Spirit. Tracy also loved to sing and being a member of the Male Chorus as well as the Praise Team was very fulfilling for him. All who knew him were blessed as he sang songs made famous by The Canton Spirituals, Lee Williams and the QC’s and other gospel quartets. He also could express himself so eloquently in his poetry. Upon request by friends and family, Tracy could write a poem tailored especially for the one who requested it. In addition to his parents, he was preceded in death by a brother James Hairston (Peewee) and a sister, Princetta H. Covington. Tracy is survived by his devoted wife of 38 years, Linda J. Dula Hairston of the home; daughters, Sherrie H. Wimbush; Ericka R. Morrison; son, Tracy, Jr. (Linda). Grandsons: Jewel (Angie); Jordan (Janine); Gregory N. Granddaughter: Porshe 4 great granddaughters: Mariah, Madison, Allysa and Jaeden. 2 Great grandsons: Brendan, Jr. (BJ) and Jai Brothers: Robert (Shirley), Tommy (Elois) Sister: Sandra Wilson Brother-in-Law: Everette Dula (Cynthia) Sisters-in-Law: Mary R. Derr, Irene D. Whisonant, JoAnn D. Brown and a host of loving nephews, nieces and relatives as well as brothers and sisters in Christ. A public viewing will be held Friday, August 21, 2020 from 2pm until 5pm At Douthit's. Funeral services will take place Saturday, August 22, 2020 at 11:00 am from Galilee Missionary Baptist Church and interment will follow in Piedmont memorial Gardens. Arrangements are in the care of Douthit Funeral Services.

Deacon Tracy Donald Hairston, Sr. transitioned from labor to reward in the early hours of Tuesday, August 18, 2002. He was born September 12, 1947 in Axton, Virginia to Henry V. and Viola P. Hairston who preceded him in death. He was educated... View Obituary & Service Information

The family of Deacon Tracy Donald Hairston created this Life Tributes page to make it easy to share your memories.

Send flowers to the Hairston family.