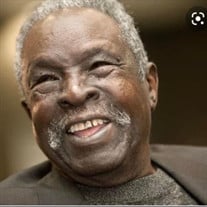 Willie James Carter was born on June 26, 1926 to Amanda (Trixie) Bowman and Willie Lee Carter. He transitioned from this life to his heavenly home on Wednesday, December 29, 2021. Mr. Carter was educated in the Winston-Salem, N.C. public schools where he excelled academically and graduated from Atkins High School in 1942 at the age of 16. He also excelled in sports, especially baseball and football. He put up his age and enlisted in the United States Navy where he was stationed in Hawaii during WWII. Mr. Carter also played baseball while serving in the U.S. Navy. Upon being discharged, he returned to Winston-Salem and married his high school sweetheart, Ruth E. Carter who preceded him in death on June 20, 2019 after 75 years of marriage. From this union was born one daughter, Dennyse Carter (Drummond). Fondly known as “Chick”, he also played semi-professional baseball in the National Negro League with the Cuban Giants and later locally with the Winston-Salem Pond Giants. He enrolled at Winston-Salem Teachers College, WSSU, where he played football and had intentions of becoming a coach. In March of 1951, after completing three years of undergraduate studies, Mr. Carter was accepted in the recruitment class as one of the first Black 8 Pioneers to integrate the Winston-Salem Fire Department. His intentions were to work six months for Winston-Salem FD and return to Winston-Salem Teachers College to complete his undergraduate degree. However, he was permanently hired and worked for 35 years where he moved through the ranks to become a Captain. Mr. Carter loved sports, especially baseball and football. His favorite baseball team was the Brooklyn Dodgers, later the Los Angeles Dodgers, and his favorite football team was the Cleveland Browns. During his youth, he attended the Friendship Baptist Church and maintained a lifelong spiritual relationship with the Lord. While retired, Mr. Carter’s many activities included working with the Atkins High School class of 1942 alumni organization where he served as Treasurer. He was inducted into the Atkins Hall of fame with his wife Ruth in 2007. Mr. Carter could appear quiet and unassuming, but he had the intellect, an innate sense of confidence, and keen discernment that was exemplified in his charismatic personality, sharp appearance, and professional demeanor. An infectious smile and laugh was a prominent trait of Mr. Carter’s charismatic personality. He was a loving and generous husband, father, grand-father, great-grandfather, and friend. He was an avid reader who read the newspaper daily and loved to discuss current news and historical events with others. As a “great debater”, Mr. Carter was a learned historian who could recall many significant events from his youth, decades of historical national and world events, and local history about the city of Winston-Salem. His story telling ability was a great contribution to the significance of oral tradition in the African-American community. He enjoyed trips with his wife Ruth to visit his daughter’s and granddaughter’s families in Marylandand spending family time during the holidays. Mr. Carter was preceded in death by his parents, wife, and devoted and loving grandmother, Louise Valentine, fondly known as Gran. Mr. Carter is survived to cherish the legacy of his love and memories by his devoted daughter, Dennyse (Reginald) Drummond of Maryland; one granddaughter, Regina C. (Antonio) Hines of Maryland; two-great granddaughters, Thierry Hines and Tannah Hines of Maryland; and a host of nieces, cousins and special friends. A public viewing will be held Thursday, January 13, 2022, from 1pm until 5pm at Douthit's, Funeral service will be held Friday. January 14, 202 at 12:00pm from First Baptist Church and interment will follow in Piedmont Memorial Gardens The family will receive friends at 11:30am. Arrangements are in the care of Douthit Funeral Services.

Willie James Carter was born on June 26, 1926 to Amanda (Trixie) Bowman and Willie Lee Carter. He transitioned from this life to his heavenly home on Wednesday, December 29, 2021. Mr. Carter was educated in the Winston-Salem, N.C. public schools... View Obituary & Service Information

The family of Mr. Willie "Chick" Carter created this Life Tributes page to make it easy to share your memories.

Send flowers to the Carter family.