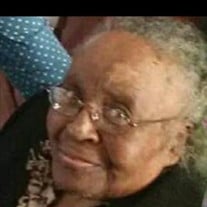 Life is like a notebook. Two pages are already written by GOD. First page is Birth. Last page is Death. Center pages are empty, So fill them with SMILE & LOVE. Author unknown Willie Mae ‘Bam’ Reeves Jefferson’s Notebook GOD wrote on: • the first page, November 3, 1926 • the last page, January 20, 2021 GOD left the center pages empty for her to fill herself. Between November 3, 1926 and January 20, 2021, Willie Mae ‘Bam’ Reeves Jefferson filled her center pages with SMILES & LOVE! Willie Mae ‘Bam’ Reeves Jefferson (94) was born in Montvale, VA on November 3, 1926 and received her wings peacefully on January 20, 2021 in Winston-Salem, NC. She gave herself the name ‘Bam’ when her granddaughter, Michelle, was born because she wanted Michelle to call her father’s mother ‘Grandma’. Thinking of others was her way. ‘Bam’ as she was affectionally called by many was a daughter, sister, wife, mother, grandmother, great grandmother, aunt, cousin, niece, and friend. She touched many lives with her warm smile. She was known as a gentle spirit and a touch of humor. As a young adult she moved to Roanoke, VA where she met and married Quinton Jefferson. While in Roanoke, she was frequently sought after by neighbors, friends, and family to make them her famous yeast rolls. She was a faithful member of High Street Baptist Church for over 50 years. Her daughters relocated her to Winston-Salem, NC in 2008 and she became a member of Mount Zion Baptist Church. She was preceded in death by her mother, Annie Robinson; husband, Quinton Jefferson; sons, Quinton, Jr and Stevenson ‘Steve’, sister, Bertha Gray and great-granddaughters, Kelli and Katherine Whitaker. She is survived by two daughters, Phyllis Dianne Jefferson Dunnaville and Angela Jefferson Briscoe, all of Winston-Salem NC; three grandchildren, Michelle Dunnaville Whitaker (Kelvin) of Greensboro, NC; Aaron (Jennifer) Briscoe of San Jose, CA and Maurice Briscoe of Richmond TX; one great-granddaughter, Kayla Michelle Whitaker of Greensboro, NC; and a host of nieces, nephews, cousins extended family and friends. A public viewing will be held Sunday, January 24, 2021 from 1pm until 5pm. A Graveside services will be held Monday, January 25, 2021 from Gardens of Memory Cemetery. Arrangements are in the care of Douthit Funeral Services.

The family of Ms. Willie Mae Jefferson created this Life Tributes page to make it easy to share your memories.

Send flowers to the Jefferson family.